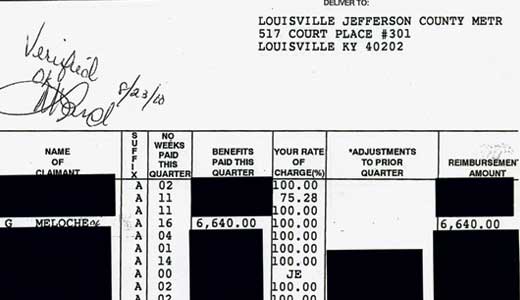 Gilles Meloche, the former director of Louisville Metro Animal Services who resigned in 2009 amid allegations of animal torture, sexual harassment, misappropriation of animals, and inhumane conditions at the agency’s 3705 Manslick Road shelter, received more than $10,000 in unemployment insurance compensation from the city last year, according to records obtained by LEO Weekly.

The documentation, provided to LEO by Louisville Metro Human Services following a lengthy open records battle between the publication and the Jefferson County Attorney’s Office, reveals that Meloche received $10,790 in unemployment insurance for 26 weeks in 2010 — the last disbursement arriving as late as Nov. 17, 2010 — despite voluntarily resigning. Additionally, Meloche was awarded $10,081 of “vacation pay – termination” just days before stepping down as the city’s top dog catcher, documents show.

“I think it’s outrageous,” says Metro Councilman Kelly Downard, R-16, a longtime LMAS watchdog. “My understanding is he’s ineligible because he quit… wait, I take that back: If (former Mayor Jerry Abramson) decides you can get paid, then you get paid.”

Downard questions the logic behind Metro granting benefits to Meloche given the former director is named as a defendant (along with Interim Director Wayne Zelinsky) in two sexual harassment lawsuits, as well as the rapid deterioration at LMAS during Meloche’s tenure, which lasted from July 2005 to December 2009.

“My understanding is that they have turned down several people (at LMAS) for unemployment insurance,” Downard says. “The uneven distribution of benefits ought to make the public as upset as can be about it… When I hear that, I stop and think, what in the world is going on? Taxpayers ought to be outraged. That’s their money, and it’s just being given out like it’s somebody’s private dollars.”

After the Kentucky Office of Employment and Training first disqualified Meloche from receiving benefits on Jan. 1, 2010, documents show the ex-director filed an appeal on March 25. That appeal was successful in large part due to the efforts of Abramson, who, with Deputy Mayor William Summers, submitted an assessment of LMAS’ working conditions to the state unemployment referee, which arbitrates claim cases.

“An assessment of the (Manslick Road) facilities by claimant’s direct supervisor (Deputy Mayor William Summers) and Mayor Abramson concluded that the conditions were not conducive to claimant being able to properly perform his job duties,” the appeals referee wrote on Apr. 29, 2010. “The employer’s lack of actions rendered the work unsuitable and allowed claimant no reasonable alternative but to leave the employment… Therefore, it must be held (Meloche) voluntarily quit unsuitable work with good cause attributable to the employment and is not disqualified.”

An April 23 letter signed by Assistant County Attorney Mary Ann Watkins explicitly states, “Louisville Metro Government does not challenge Mr. Gilles Meloche being awarded unemployment benefits.” –According to Bill Patteson, county attorney spokesman, the decision to not challenge Meloche’s unemployment claim was made by the Mayor’s Office, possibly by former Mayor Jerry Abramson, who praised Meloche as a “change agent” on more than one occasion.

On March 24, 2010, Meloche wrote an appeal letter to the Division of Unemployment Insurance, stating, “The decision and assessment of the working conditions were done by my supervisor Bill Summers, the mayor Jerry Abramson [sic] and me,” Meloche wrote. “On a common decision we all agreed that it was in the best interest of all parties, the department and the government that I resigned. I was definitely and completely unable to perform the normal and needed activities to manage the department. It would have also been detrimental on the animals that need full consideration to stay healthy and be adopted.”

Abramson, who begins an “executive-in-residence” position at Bellarmine University this week teaching classes about civic leadership, could not be reached for comment for this story.

The ease with which Metro allowed Meloche to claim benefits sharply contrasts its handling of other city employees’ benefits, especially those who have criticized the embattled animal control agency.

Most notably is Metro Public Works employee and former LMAS kennel attendant Eric Garrett, who in April 2010 was suspended without pay for speaking out against mismanagement and waste within the department, and who was ordered to undergo a psychiatric evaluation to retain his job. Prior to that snafu, Garrett claims he was transferred to Public Works from LMAS in 2006 as a result of criticizing Meloche’s decision-making. After some legal wrangling, the state government slapped down Metro’s denial of Garrett’s benefits.

Additionally, Metro has denied benefits to former LMAS animal care manager Dawn Simpson, who resigned Aug. 21, 2009, after alleging sexual harassment by Meloche and retaliation by him and Zelinsky, then the agency’s second-in-command. Legal documents show that Simpson appealed and attended three unemployment hearings in a process spanning several months, and ultimately was awarded only a fraction of the benefits she had claimed.

“We went through multiple hearings where the county attorney … fought us tooth-and-nail on her unemployment. It’s unbelievable,” says Mikell Grafton Skinner, Simpson’s attorney. “Their basis was that she quit voluntarily. She wrote a very specific letter the day she walked out of there, and she said she could not last one more minute in that environment,” in effect echoing the very argument made by Meloche in his resignation and appeals letters. Skinner claims that a clerical error also contributed to Simpson’s claims not being properly processed, and that the county attorney’s office exploits unemployment insurance awards by playing favorites.

LEO Weekly obtained the aforementioned records after appealing a series of decisions made by the county attorney’s office, each of which denied access to Meloche’s unemployment disbursement. The Kentucky Attorney General’s Office issued an opinion on Dec. 22, 2010, ruling that Metro had incorrectly invoked exceptions to Kentucky open records law in an attempt to withhold evidence that Meloche had collected unemployment.

“Louisville Metro Government improperly relied on (exceptions to open records law) in denying (LEO Weekly’s) August 16, 2010 request,” Assistant Attorney General Amye L. Bensenhaver writes in a five-page ruling. “Metro thus stands in the same shoes as all other employing units insofar as it is not bound by the confidentiality provision found at KRS 341.190(3),” which deals with exceptions to confidential information.

Patteson defends Metro’s reading of open records law, calling it “an abundance of caution on behalf of our client.”

“In terms of any further detail on discussions we would’ve had with Metro government (to not challenge Meloche’s claims), that is under attorney-client privilege, and we would need to have the permission of Metro to be able to go into any further detail,” Patteson says. “If Meloche isn’t disqualified, then there’s not sufficient grounds to challenge (the decision).”

“The most neutral explanation I can give you for what they did is they don’t want to give out records, so they look for any reason not to,” Fleischaker says. “I just can’t see how anybody can read this statute and come up with the idea that (this information is) confidential. What happens is, and it’s not just with them, it happens with a lot of public agencies, they get … nervous that somehow they’re going to violate someone’s rights. In this case, I don’t know how they could’ve thought that because all of the salary information about Meloche is open (for inspection).”

Fleischaker adds that he doesn’t think it’s an inadequacy of what Patteson called the “broadly worded” open records statute, but rather a failure of the county attorney’s office to properly do its job.

“The best explanation I can give you is an absurd sense of being scared about what Meloche might do if they gave out the information,” Fleischaker says. “That’s just foolishness.”