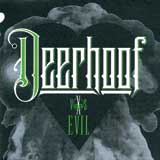 Deerhoof have emerged as something akin to elder statesmen among the legions of V-necked indie-poppers wholly self-satisfied in their own cutesiness, and your enjoyment of Deerhoof vs. Evil, the band’s 10th long-player, rests largely on your tolerance for this hard-to-label yet inescapable style. That same syrupy smugness tests the listener’s patience throughout, ultimately proving insufferable on trifles like “Super Duper Rescue Heads!” and Apple-commercial-ready “Hey I Can.” It’s a shame, because the band is clearly capable of delivering the goods — “Behold a Marvel in the Darkness” adds some much-needed muscle to the proceedings, while sumptuously melodic closer “Almost Everyone, Almost Always” sounds like an entirely different band. An album’s worth of songs like these would be an unqualified success, but as it stands, Deerhoof vs. Evil is too oppressively cloying to work as a whole.