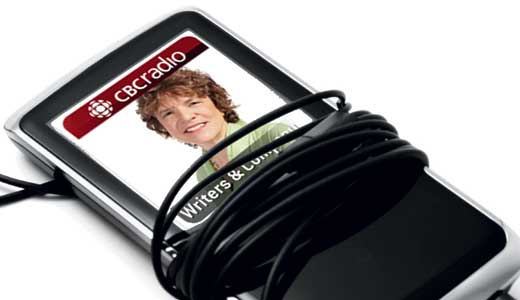 Apologies to “Fresh Air,” which is the kind of program that first inculcated me with a love of radio, but Eleanor Wachtel makes Terry Gross sound like a journalism-school sophomore.

I first heard CBC Radio while on vacation in Nova Scotia, back before there was such a thing as a podcast. In those days, I was impressed not only by how much arts coverage there was in Canada, but also by how the CBC announcers would tell listeners what time of day various programs would be running in each province of the country.

Music shows abound on CBC Radio, and let’s face it: The whole country is indie, so you’re not going to be listening to claptrap when you tune in. You’ll find documentaries on every subject imaginable. (I once heard an hour-long special on the history of the toothbrush, and I tell you, it was fascinating.) You’ll find more history and geography programs than you can shake a hockey stick at, more cookery shows than you could beat back with a rasher of Canadian bacon.

Out of the multitude of cultural coverage, though, the standout by far is “Writers & Company.” Eleanor Wachtel, the show’s host, began the show 20 years ago in Toronto. In the early days, she conducted weekly panel discussions, but her interviewing skills became so sharp that she was soon led to do hour-long segments with individual writers. She interviewed Richard Dawkins 10 years before he became a household name for atheist fundamentalists.

Wachtel has a way of being both intimate and incisive at the same time, from start to finish, in every single interview. Even when taking on writers I’m sure I don’t want to hear another word from (yes, that means you, Jonathan Franzen), I can never manage to turn off the interview or fast-forward through so much as five minutes of it. She’s that good.

The difference between Wachtel and other hosts in her line of work is that without being in any way a show-off, she demonstrates that she has read the body of work under discussion. She hasn’t had producers doing her homework for her. She doesn’t have anyone speaking into a secret earphone, prompting her with what to ask next. The fact that “W&C” is only one of several shows she conducts on the CBC makes you wonder how in the world she has that much time to read; but when you listen to her conversations, you know she does. She makes the time.

Wachtel is famous for landing writers who assiduously avoid interviews to sit down with her and spill some beans. She got Philip Roth to talk to her back when he wasn’t doing that with anyone else, and he did not treat her like a dirt-bag. She has a phenomenal mix of well-known Anglo writers and lesser-known international writers.

Perhaps most stunningly of all, she got J.M. Coetzee, the recluse’s recluse, to speak into the mic. He told her beforehand that he refused

to answer any questions about his childhood, his writing habits or life in South Africa. Other than that, he was game. Once you know Wachtel’s style, you realize just how sly she is for getting around these restrictions. She worked her way in by asking him questions about how other writers had influenced his work and his vision of the world. Coetzee’s way of speaking is painfully slow. I found myself using a button on the iPod that I’ve never had to use before — the one that lets you speed up the pace of what’s being played. I would set it to Normal for Wachtel’s questions, then ramp it up a couple of notches for Coetzee’s answers. Handy!

Go to the “Writers & Company” website where, among other things, you can check out the archives, Wachtel’s blog, and see the hilarious photo of her with Gary Shteyngart: www.cbc.ca/writersandcompany.