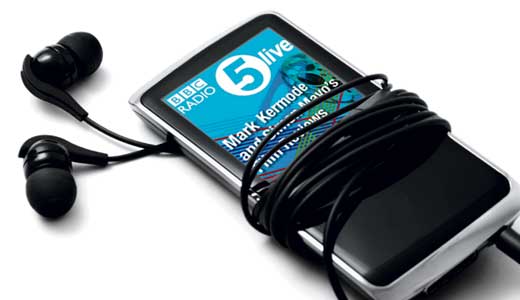 Hey, everybody, it’s Opposite Week! For starters, these two ’casts didn’t quite make the top 10 cut, so I’d planned to save them ’til later. But since we’re getting close to the Oscar countdown, and national entertainment coverage will soon be nothing but celebrity glitz and glam, I thought it might be time to delve into some good listening from across the pond.

It’s hard to think of any two cultural venues less alike in tone and coverage than “The Film Programme” and “Kermode and Mayo on Film.” Come to think of it, each pretty much defines the differences between BBC Radio 4 and Radio 5.

If you lived in the UK, you’d know within a day which station was going to become your own. Radio 1 would be your WFPK. Radio 3 would be your WUOL. Radio 2 would be your WDJX (without the advertising). Radio 5 would be your WHAS. If Francene were still among us, she’d tune right in to 5 Live. And Terry Meiners would fit in, as well — if only he had a Cockney accent. Radio 5 is jabbery. It’s sporty. It’s rife with crazy call-in shows.

Radio 4 is in a league of its own, with the kind of programming we in the United States could only dream about until Internet broadcasting made it a reality. Now we get to have it whenever we want. In fact, the bulk of this column in the following months will spring from Radio 4, as it is the place to turn for arts info from just about everywhere on the planet.

For the moment, let’s turn to Radio 4’s “Film Programme” with Francine Stock. The first syllable you hear Stock pronounce, you know beyond the shadow of a doubt that she graduated from Oxford. In a movie (if she were the subject of one rather than the presenter of many), she would be played by Kristin Scott Thomas. She’s plummy, she’s posh, she’s precise. “The Film Programme” runs only a half hour per week, but, oh, the things our Lady Stock packs into that half hour: reviews, previews, interviews, the entire history of cinema. Seriously, it’s worth a tune-in simply to hear her say the word sin-eh-MAH. Also? Just because she’s plummy doesn’t mean certain directors don’t get testy with her. A couple of months back, Stephen Frears nearly bit her smart, gorgeous head off when she asked him how filming a graphic novel differed from directing his earlier work.

Which brings us to … the real head-biter, Mark Kermode. (No relation to Frank Kermode, the literary theorist; I’m not even going to tell you what his last name was before he had it legally changed.) For some, Kermode will be an acquired taste. For others, he’s just what the doctor ordered. Indeed, his loyal fans call him Dr. K.

Dr. K is a bit of a leftist ranter. The live show itself is too long. This is one great thing about radio podcasts: All of the crap is cut out. So instead of two hours of these jokers going on forever, you get the essential stuff, and here the essential thing is Dr. K’s weekly rant. I have listened at least seven times to his diatribe on “Sex and the City 2,” which he deems “consumerist pornography.” It’s that perfect. Amid other blaspheming, he calls the characters “imperialist American pig-dogs” and, at one point, spontaneously bursts into the opening line of the “The Internationale.”

But don’t get ’em wrong. These guys love American cinema. And Kermode has such verbal dexterity (Mayo is mainly his puppeteer) that one can only dream about what would happen if he and Francine Stock were ever in the studio together.