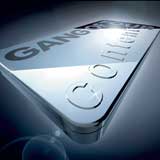 After a ’90s reunion produced two forgettable albums, the GO4 nucleus of guitarist Andy Gill and vocalist Jon King returns with its first new material in 16 years. Much of the album recalls U2’s efforts to be both punk and danceable, sans arrogant posturing, Messiah complex or excess studio polish. Content seems a focused attempt to take back “the edge” stolen in the years following 1979’s Entertainment! without recycling past triumphs. “Who Am I,” “I Can’t Forget Your Lonely Face” and “I Party All the Time” borrow vintage U2, which U2, of course, borrowed from late-’70s GO4. “Do As I Say” and “Far Away” show how much credit bands like Fugazi, Jawbox and Bloc Party owe these guys, and offer a way to appreciate GO4’s seminal influence. “A Fruitfly in the Beehive” is three and a half minutes of bad-assery. Gill’s guitar work should make the Edge blush.