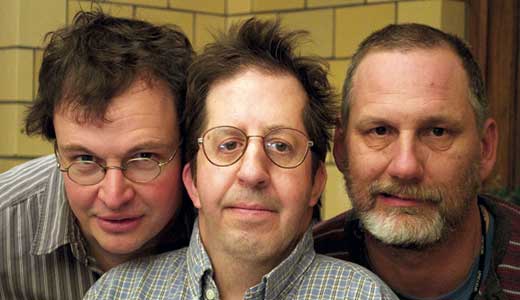 For the 11th time, the Louisville Improvisors bring you Improvapalooza, an annual comedy affair. This year, instead of being a showcase for improv troupes across the country, Improvapalooza will feature the Louisville Improvisors (founders Chris Anger and Alec Volz) with two special guests from the legendary Los Angeles-based improv group The Groundlings — Stephanie Courtney (“Flo” from the Progressive commercials) and Colleen Smith (“Showbiz Show with David Spade”). Improvapalooza 11 takes over the MeX Theater at the Kentucky Center this weekend. LEO caught up with founder Chris Anger and guest comic Courtney.

LEO: Tell me what we can expect from Improvapalooza this year.
Chris Anger: As you know, Stephanie (Courtney) is coming, and she’s bringing a friend of ours from The Groundlings, Colleen Smith. So it’ll be Alec (Volz) and I playing with Colleen and Stephanie — with Todd Hildreth doing the music throughout. So it’s just going to be the four of us both nights — and we’re going to break the show up into two parts. It’ll be a lot of disparate characters.

LEO: So is improv theater innately humorous, or can it be as dramatic as it is funny?
CA: That’s a really good question. The thing is that the four of us, five including Todd, we all do comedy. We’ve all done other stuff, but improv is inherently funny. If you follow all the rules of it, you’re going to be forced into situations that are ludicrous or beyond the realm of possibility. But if you can bring the audience into the reality — it’s going to be funny. That’s what I always tell people when I teach, “Don’t try to be funny, it’ll be funny.” That said, it makes the comedy better if you have real moments in it.

LEO: This year is the first time you haven’t brought other groups. Why is that?
CA: Now that you mention it, this is the 11th year, and it’s the first time we haven’t had any other groups. I don’t know, Alec and I were talking a couple of months ago, and we had this idea and decided to just go with it. It’s a little different; it’s expanding on what we do, because everyone has shorter sets when you have more groups.

LEO: There seems to be a line drawn in the sand between improv comics and stand-up comics. Why is that?
CA: (Laughs) I do know that improvisers are a lot less bitter than stand-ups, that’s for sure. I’ve done ’em both. Stand-ups, you’re out there all by yourself. You’re struggling against the current, the crowd is against you, you have to compete against all the fuckin’ bar noise and shit, and there’s the road and all that. And for improvisers … for it to work properly, you have to work together. I mean, I don’t hate stand-up comedy at all. It’s just a different mindset and a different skill set. I just think improv is the purest form of comedy there is — and the magic of being in the moment is amazing when it works. Because you don’t know before you go out there what’s going to happen, and when it happens, it’s pretty fuckin’ cool.

Stephanie Courtney plays well with others

In her everyday clothes, you may not recognize Stephanie Courtney as the quirky and adorable Flo from the Progressive insurance commercials, but that is most definitely her. Courtney is also a senior member of The Groundlings, has been featured on the critically acclaimed AMC show “Mad Men,” and has been in films with comedy heavyweights like Ben Stiller and Will Ferrell.

LEO: How do you go from studying criminology to working with The Groundlings?
Stephanie Courtney: After I solved the case of “The Hound of the Baskervilles,” I felt I’d pretty much cracked the toughest puzzle ever and figured every other case would feel like an anticlimax. So I moved to L.A., saw a Groundlings show, and auditioned for the basic level class at the theater.

LEO: You performed at Improvapalooza before. What do you remember about Louisville?
SC: Twice before — 2008 and 2010. The last time I came was in January, and it was good and cold. I’m from New York originally, so I really like it. I loved the people and the cool, old buildings. All the brick reminded me of the buildings back home. I should really go back home more often.

LEO: You are obviously most known for the character of Flo in the Progressive commercials. How much of Flo did you bring, and how much of her was on the page?
SC: They knew they wanted a very quirky but sincere “diner waitress who knows you” kind of a vibe. And once all that hair and make up came on, that personality kind of got bigger to match. I must say, it’s been a blast.

LEO: Why do you feel like people respond to Flo so well?
SC: I don’t know, I’m just grateful. If I had to guess, I think folks like her for her imperfections and quirks. And she’s genuinely happy to meet and help people. And she’s just a pinch o’ crazy — like Aunt Jenny from “The Brady Bunch.”

LEO: You have a history in stand-up, and a stand-up comedian once told me, “Improv comics are comedians who had happy childhoods.” Would you say that statement is fair?
SC: Who is that stand-up comedian, ’cause that statement is awesome! Fair/unfair? Hmm … I can only speak for myself. Stand-up was wonderful for me to do, but it’s a solitary form of comedy. Doing improv also includes socializing onstage and off. So I think an improviser has to enjoy the social aspect on some level. I don’t know if that equals happier per se. But it forces you to connect and listen to others. In the end, it was more fun for me to play with others.