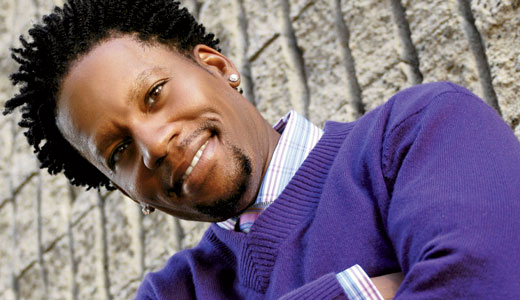 After two decades of laughs, few would dispute D.L. Hughley’s claim as one of the “Original Kings of Comedy,” a tour he did with friends Steve Harvey, Cedric the Entertainer and the late Bernie Mac that kicked off an industry-wide phenomenon and launched a million imitators (“Blue Collar Comedy Tour,” “Latin Kings of Comedy”). In a rare club appearance, Hughley takes the stage at The Improv this weekend.

LEO: How are you doing today?
D.L. Hughley: I’m exceptional, man, exceptional. Freezin’ my ass off, but other than that, I’m fine.

LEO: I hear things have been busy for you.
DLH: Well you know what? It beats the alternative.

LEO: Have you been through Louisville before?
DLH: Yeah. I have yet to make the Derby, but I have had a mint julep and a ton of bourbon. I’m always booked either just before or just after it — it’s something I’ve gotta do because everyone raves about it.

LEO: Will you be doing new material when you come through town?
DLH: Absolutely. Singers get to do classic stuff — if a comic does classic stuff, it means he ain’t been writing.

LEO: What made you want to do comedy in the beginning?
DLH: I’m sure you’ve heard this from a million people before, but I don’t think people find these kinds of things, I think they find you. I was at a barbershop talkin’ a little shit, and the barber said, “If you think you’re so funny, I’m doing a concert, go up and open for me.” I did, and this is what I’ve loved ever since.

LEO: Do you remember that first time onstage? Were you nervous?
DLH: I’m just as nervous every time I go onstage, that doesn’t ever change. But I remember something about every time I’ve ever been onstage. Either somebody in the front row, or what I wore, or a joke I told, or the ride to the hotel … I always remember somethin’ like that.

LEO: Are there any horror stories from the old road days?
DLH: I remember we did a gig around where you are, in fact … we did Louisville, Lexington, Columbus and Indianapolis … that little circle in a single run. Anyway, I was in Columbus, and a guy jumped onstage and pulled a gun on me … so that was kinda weird.

LEO: Is there an advantage to doing smaller club shows like the one here at The Improv?
DLH: Wherever I get booked is where I’m excited to play. I think clubs have a little aura of their own because they wear you on your craft. I never feel more like a comic than when I’m playing a club.

LEO: Is it more electric? Does it make the material work better?
DLH: I think it’s more like going home — it’s more familiar. Concerts and theaters feel a little more serious — you have to have a finished product. Clubs, you entertain, but ultimately you get to experiment.

LEO: It’s been a couple of years since Bernie Mac passed, but is there a chance that we might see the remaining “Kings of Comedy” do something new?
DLH: Speaking for myself, last week, I participated in a documentary that Comedy Central is doing about Bernie Mac. As far as anything else happening, I hope as much as anyone that it does.