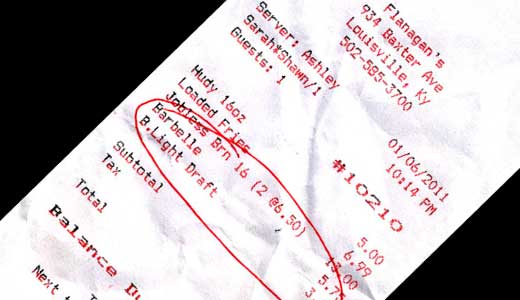 Tattered and torn, weak and worn, I stumbled into the Holy Grale on a cold January Saturday night, and I was saved. The new Highlands bar is situated in a building that used to be a church … and a hot dog restaurant. Opened by the same folks who own the Louisville Beer Store, the Holy Grale worships at the feet of craft beer, creating a cozy, comfy environment that I assume churches were like before the Ten Commandments were put upon the pulpit. There’s a rotating list of 20 beers on tap, ranging from $5 and up, although most fall in the $7 range. Included on the chalk board that lists the beers is the ABV — so you can figure out the cheapest bang for your buck … or at least that’s what I did. Unfortunately, I can’t remember the exact names of what I had (occupational hazard), but I do recall a tasty red ale and something referred to as Dragon’s Milk, which made me conjure up an image of fire shooting from a nipple — thanks. After two high-percentage beers, I was speaking in tongues.

Unlike the Beer Store, the Holy Grale has seating and a reasonable menu of interesting snacks including Scotch Quail Eggs, Thai Popcorn, Sweet Potato & Black Bean Tacos and … wait for it … seriously, you’ll want to wait for this … a chocolate-covered Twinkie! Where else can you find chocolate, beer and salvation for under 15 bucks?

The website describes the bar as European-style … and it definitely gave off that vibe seeing as there were no blaring televisions, no blinding neon signs and no sorority girls sipping on vodka cranberries. It actually reminded me more of the Thirsty Monk in Asheville, N.C. — another fine establishment that bows down to the tradition of craft beer.

The Holy Grale is located at 1034 Bardstown Road. Call 459-9939 or check out www.holygralelouisville.com for more information. See you on Sunday … because it totally counts as going to church. Mom will be happy … and might even give me money to tithe.

Bar Belle Martini
One of my New Year’s Resolutions became true last week, and I really didn’t have to do a thing! The fine, friendly ladies at Flanagan’s Ale House (both named Ashley, coincidentally) created the first-ever Bar Belle Martini, and it’s even in their computer system … I have the receipt to prove it! For $5.75, you can have a taste of me … or what I’d taste like if I was melted down and poured into a glass — sweet and full of bourbon. Get it right, get it tight.

Back Door on TV!
The Discovery Channel recently took over the Back Door to film an episode of “Stolen Voices, Buried Secrets,” which will air Monday, Jan. 17, at 10:30 p.m. on Investigation Discovery (Insight channel 471). The episode is based on a murder that happened at the now-defunct Bulls and Bears Tavern on Fegenbush Lane in which a mother hired her son to kill her husband. Creepy. Back Door owner John Dant says he was happy to turn over the bar for filming. “It was a blast to learn how the crime scene was done,” he says. “They interviewed the detective and had all kinds of police vehicles with lights on outside. Neighbors didn’t have any idea what was going on as they sat on their porches — hell, they probably were looking forward to me being shut down.” Not true, John. Not true.

Beer & Ballet
Now that I’ve seen “Black Swan,” ballerinas have my undivided attention. And I’d love nothing more than to drink some beer with these beauties. Lucky for me, the Louisville Ballet is hosting a “Pas de Brew” fundraiser on Saturday, which pairs craft beer from Goose Island and BBC with fancy food from Corbett’s. There’s also going to be a silent auction and live music by The Seedy Seeds. The evening starts at 6:30 p.m. at the Louisville Ballet, 315 E. Main St. For tickets ($200 per person, or $60 for just dessert and beer), call 583-3150. Leave your breakdown at the door, please.

Drunk Texts of the Week
• My beer goggles are wine spectacles, and you bet ye olden ass Id do me
• Bean dip dsnt kill herpes, people kill herpes
• Wine after liquor just makes the vomit bigger
• We sacked that dog killer!
• Brett favre mistook my ass for a vagina
• Like a capri sun … suck it!