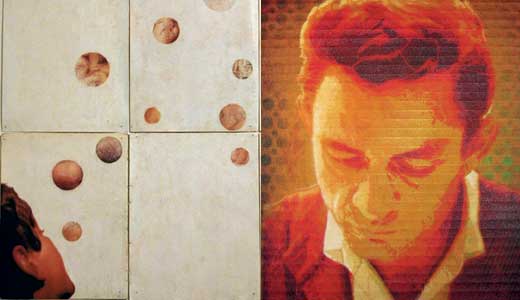 It’s hard to say goodbye, especially when it’s premature. And in recent weeks, Louisville has had to do just that following the sudden deaths of two local visual artists.

Antonio Perez died on Tuesday, Dec. 21, at the age of 45. Stephen Irwin, 51, died on Monday, Dec. 27. Heart attacks claimed them both, and while Irwin had a history of heart problems, Perez did not. On the surface, their art is dissimilar, yet both had technical standards and skills acclaimed by their peers.

The Tim Faulkner Gallery, 632 E. Market St., represents Perez, a stencil artist. “(With the death of Perez), Louisville and the art world at-large lost a premier talent who was far too young,” Faulkner says. “Tony was born in Spain but grew up in England and eventually wound up in the States. He spent many years living in Louisville and amassed several lifetimes’ worth of friends. Tony will be missed, not only by those who knew him and his work, but also by those who never got a chance to simply say hello. From all of us, Tony, you will be missed.”

Irwin was a member of Zephyr Gallery, 610 E. Market St. He made an impression in his multimedia art as well as in person. “He loved every person he met, whether they were millionaires or street people,” says close friend Debbie Lair. “He had more creativity in his little finger … his art was so important. It’s been said he’s the rock star that Louisville never had.”

Sculptor Julie Schweitzer wanted to get Irwin to join the gallery from the moment she saw his art. “He knew he was good and respected, not only for his work but for his opinion. He had an eye. He was a force (at Zephyr) and made us work more.”

Perez’s work will be on display at the Tim Faulkner Gallery until sold. His art also is included in the group show “Multiplicity” at the Louisville Visual Artists Collective, 2932 Cleveland Blvd.; it closes Jan. 7. Contributions to the Tony Perez Memorial Fund can be made through PNC Bank.

The Speed Art Museum, 2035 S. Third St., owns “Skin Diary” by Irwin and will hold a memorial for him on Saturday, Jan. 15, at 4 p.m. Funds in his memory can be sent to the New Art Collectors of the Speed Art Museum.