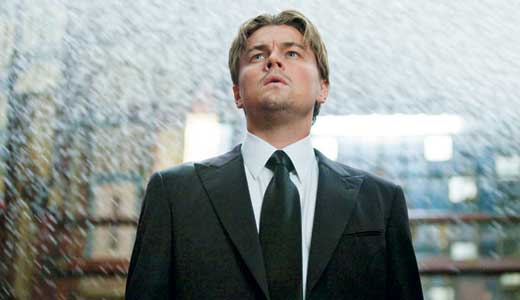 If you’ve got a movie junkie on your Christmas list — and deep pockets — then do we have a deal for you! This 75-film, three-volume set includes 46 Oscar winners: everything from 1933’s “Cavalcade” (never before available on DVD) to 2010’s “Avatar.” We could blow all our ink this week detailing just a fraction of the amazing films in this collection and never get around to mentioning the exclusive bonus goodies, such as the hard-bound book that takes you on a journey with some of the greatest filmmakers and stars from 20th Century Fox’s amazing history. Available at any good local vidstore.

Christopher “Dark Knight” Nolan takes us on the ultimate journey, a visually spectacular and totally immersive mind-bending trip into the very threads of reality. Leonardo DiCaprio leads a team of dream-invaders, skilled at extracting valuable secrets from unsuspecting people while they sleep. But if you are driving someone’s dream, how do you know you aren’t in a dream yourself? A simply brilliant, breathtaking, over-the-top sci-fi actioner co-starring Joseph Gordon-Levitt, Ellen Page, Ken Watanabe, Marion Cotillard and Michael Caine. A must-own.

Finally available at less than $100, the most brutal martial arts title ever conceived by the legendary Shaw Bros. and Chang “Five Deadly Venoms” Cheh. Norman Chu stars as the titular fighter, against whose deadly Silkworm Technique there is no defense. A wuxia nightmare come to life. Also available: “Return of the Bastard Swordsman” (1984) for the same price.

Finally available on Blu-ray, the movie that proved Mexican horror films don’t have to suck. The breakout flick of writer/director Guillermo del Toro (“Hellboy,” “Pan’s Labyrinth”), this is the tale of a gentle grandfather who innocently comes into possession of a gilded clockwork mechanism that will make your skin crawl called the Cronos Device. It gives him eternal life and a thirst for blood … even that of his beloved granddaughter. One of the best films we’ve ever seen.

GRAHAM PARKER & THE FIGGS: LIVE AT THE FTC

Brit rocker Graham Parker demonstrates how — at age 60 — a live rock show is supposed to be done in this concert pic celebrating his 20th album release. For the uninitiated, Parker, whose seminal band, The Rumour, was the heart and soul of Limey new wave during the ’70s, fused rock and reggae into wild, frenetic live shows as the second wave of punk swept over Europe. Both Elvis Costello and Joe Jackson name him as major influences on their music. With a bonus CD.

The latest from “Roger Corman’s Cult Classics” series. We will always remember Cloris Leachman as Crazy Mama, the California beauty parlor owner who takes her mom and teenage daughter on a joy-ride/crime-spree that stretches all the way to Arkansas. Directed by Jonathan “Silence of the Lambs” Demme. Then, in “Lady in Red,” Pamela Sue Martin stars as the infamous moll who brought down gangster John Dillinger (Robert Conrad), with help from Louise Fletcher and Christopher Lloyd. A pair of great schlockers from the master.

A big winner at Sundance, this razor-edged doc looks at a 15-month rotation of soldiers at Afghanistan’s Outpost Restrepo, named after one of the first soldiers to die there. A more raw and savage piece of film has never been shot, as the boredom and terror of war etches the faces of the (very) young men sent to wait and die in a deadly valley far from home.

The fourth — and supposedly last — full-length Shrek feature takes a surprisingly funny look at parenting, with Mike Myers again voicing the smelly ogre who’s out of his element caring for his crew deep in the fairyland swamps. Imagine “It’s a Wonderful Life” meets “Make Room for Daddy” as Shrek makes a deal with Rumpelstiltskin to live just one day as his old, untamed self. Eddie Murphy, Cameron Diaz, Antonio Banderas and the rest of the gang return in another great outing.

If you haven’t caught this excellent music/talk series from the Sundance Channel starring Elvis Costello, you are missing one of the true joys of video-life. This season features Bono, The Edge, Sheryl Crow, Lyle Lovett, John Prine, Levon Helm and a two-part session with Bruce Springsteen! One of the best series on the tube, hands down. Our highest recommendation.

SPICE AND WOLF: SEASON ONE

Are you into furries? Find out by watching this demented anime about a traveling merchant who finds a naked girl with the ears and tail of a wolf asleep in his cart. She’s the ex-deity of the harvest and brings the merchant nothing but trouble and fuzzy little titties. Innocent by our standards, but we’re kinda weird.

The legendary, if all-but-unseen, German look at gay life, finally available on DVD. Gritty and a bit too realistic at times, it tells the tale of a stay-at-home guy and his partner, a school teacher who lives life on the edge, bar-hopping and seeking diversion in public restrooms. Rewarding, but not for the timid.

Oh, Edward! Oh, Jacob! Oh, brother! Third in the series with one-note Kristen Stewart as the once-virginal hottie with the great hips. If you need to know more than the title, you probably aren’t interested.

There must be 10,000 of these Thomas the Tank Engine vids out by now, and they’re all pretty good, but we really liked the lesson in this one. Thomas gets so excited about getting to carry a famous lion that he misses the part about it being a statue. The lesson? Damn it, kid! Shut up and listen!

Gameplay of UK winning its fourth NCAA title against Seattle at Freedom Hall.