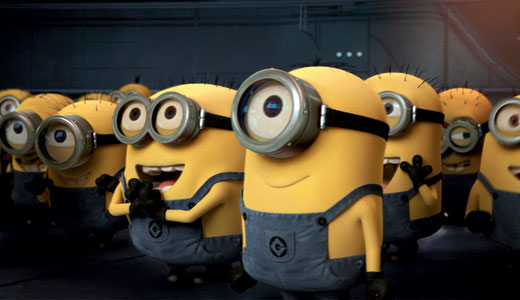 This animated comedy about a super-villain past his prime has some spectacular moments amid the uneven direction and wandering plot-line. Steve Carell voices Gru, a once-famous bad guy who is losing his pre-eminence to an upstart brainiac named Vector. The real fun comes from Gru’s army of simpleton “minions,” and his relationship with the three young orphan girls he adopts (didn’t see them in the trailers, did ya?). Won’t change your life or anything, but kinda fun.

Big-budget, big-explosion, big-name crapfest that knows exactly who its audience is: guys. Liam Neeson leads Bradley Cooper, Quinton “Rampage” Jackson and Sharlto Copley (from “District 9”) as the former paramilitary squad who break out of prison to find revenge, adventure and the good-looking Jessica Biel amid an assault of dumbass stunts. Please, just go buy this thing, otherwise we are obligated to insert a “Pity the fool” joke here. Thanks.

While the last couple of seasons tried our patience, the first two or three represent some of the best TV ever made. Kiefer Sutherland is, of course, Jack Bauer, a counter-terrorism agent who will do whatever it takes to whoever’s in the way to save America — usually at the cost of his own family. And, of course, everything happens in “real time” — though how he gets around in heavy traffic is nothing short of miraculous — providing the breakneck pace and at-all-costs heroics that made the series such a hit. All eight seasons plus the feature-length “24: Redemption.” Recommended.

The “BBS” in the title refers to the famed Hollywood production company that created some of America’s most provocative and groundbreaking films of the ’60s and ’70s. This Criterion collector’s set features “Head” (1968, starring Jack Nicholson and The Monkees), “Easy Rider” (1969), “Five Easy Pieces,” “The Last Picture Show” and two others. An absolute steal at the price.

While the name Claude Chabrol may not be a household word, his work has been copied and studied by so many other filmmakers, you’ll swear you’ve seen them before. This set includes “The Bridesmaid” and “Merci pour le chocolate.” Both are brilliant, unnerving thrillers, the latter of which made a star of Isabelle Huppert. Wonderfully decadent and deliciously amoral.

CONCERT FOR THE AMERICAS

It’s hard to believe this is the first time this has ever been available on DVD. Generally considered Frank Sinatra’s last great concert, at the age of 66 Ol’ Blue Eyes does 90 electrifying minutes at an outdoor amphitheater in the Dominican Republic. Watch for Buddy Rich on drums and a brilliant cover of “Send in the Clowns” accompanied by master guitarist Tony Mottola.

Fans of John C. Reilly and Jonah Hill have been salivating for this to make it to DVD. John has given up on life until he meets Marisa Tomei. But her son (Hill) doesn’t want to share mommy with anyone, so the two men bide their time, causing trouble for each other in order to win Tomei’s attention. Not highbrow entertainment, but definitely goofy in the “awkward is funny” vein.

This minor comedy starring Zach Galifianakis, Callum Blue and Matthew Modine didn’t make as great a splash as everyone expected, but it is a sly — and occasionally dark — look into the human soul. A group of buds witness a horrifying crime. The rest of the movie is spent wondering why one person is harmed and others are not — and is being a survivor an even worse fate?

When filmmaker Josh Fox was asked to lease his land for natural gas drilling, he educated himself on the hazards. The result is this doc on unregulated hydraulic-fracture gas-mining, a technique that is turning untold acres of America into poisoned dustbowls. In one case, he finds a town where the water … burns! You will be angry.

A seriously weird and wonderful tale from France about a man with a bullet lodged in his head and his equally bizarre friends, who band together to take down a pair of multi-national arms corporations. The whole thing has a Buster Keaton-fantasy feel to it as these hopeless, hapless underdogs quite literally take on the world. Truly inspired, even in subtitles.

The final reuniting of Jackie Gleason, Audrey Meadows, Art Carney and Jane Kean — in color! — in their classic roles. Ralph (Gleason) risks the family’s life savings, and the Norton’s holiday bonus, on a get-rich-quick scheme at Christmas. Would make a great stocking-stuffer for the ’rents.

Another Will Ferrell misfire. This time he takes Mark Wahlberg down with him as the two play a pair of desk-bound cops who live in the shadow of superstar crime-busters Samuel L. Jackson and Dwayne Johnson. Ferrell simply isn’t funny. Next.

A long-overdue full Blu-ray treatment for this underappreciated Hammer horror title. After the murder of a little girl, townspeople accuse the local Count of the crime and kill him. His dying curse comes back to haunt them when a sinister circus shows up during an outbreak of the plague. A touch of nudity and lots of wonderfully creepy scenes make this a must-own for anyone who appreciates great ’70s horror — even if Christopher Lee is nowhere to be found.