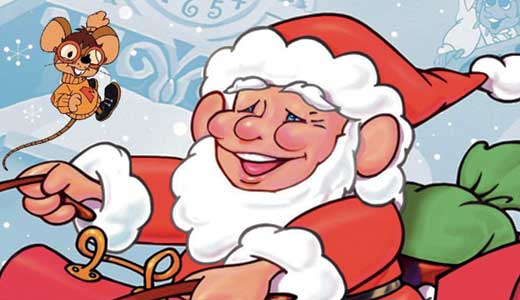 Twas The Night Before Christmas

’TWAS THE NIGHT BEFORE CHRISTMAS

All the residents of Trundleville — human and mouse — are stunned when their letters to Santa are returned unopened. You may find it hard to believe, but this perennial holiday favorite — most polls put it No. 2 behind “Rudolph” — has never been released as a stand-alone DVD. Formerly available only in scratchy, poorly transferred combos with other Rankin-Bass seasonal titles, it has finally been thoroughly remastered. And extra attention was paid to the voice-track, cleaning up those wonderful songs by Joel Grey, Tammy Grimes and Lonesome George Gobel. Happy Ho Ho!

LEGEND OF THE GUARDIANS: THE OWLS OF GA’HOOLE

Director Zack “Watchmen” Snyder brings his operatic visual style to kid-flicks. A young owl sits mesmerized by his father’s tales of The Guardians, legendary warrior-protectors of the flock. When kidnapped, he realizes the world is being threatened by the same evil found in his father’s stories. Escaping, he gathers his friends together to go in search of The Guardians and join them in their quest to defeat the evil once and for all. A damn fine computer-animated outing with style, grace and heart, thanks to the source novels of Kathryn Lasky.

A laid-back suburban skirt-chaser has a bad night and wakes up in a hospital. It seems he’s been named in a paternity suit by a woman he can’t remember having sex with, and, oh yeah, his testicles are gone! A surprisingly heart-warming drama about what it takes to be a man.

M. Night Shyamalan’s latest script is, sadly, a wasted opportunity. The premise (five people are trapped in an elevator; one of them is the Devil) is so brilliant that it seems like he’s channeling Hitchcock. But director John Erick Dowdle goes all arty on us, turning it into a tedious and boring study in too-clever dialogue instead of the straight-out thriller it yearns to be. A shame. This first in a supposed trilogy stars Chris Messina, Bokeem Woodbine, Jenny O’Hara and Geoffrey Arend.

Some people have called this “charming” in the same way that “Pretty Woman” — about a hooker who blows Richard Gere for money — is charming. Uh-huh. Here Emma Stone, a 22-year-old “high-schooler,” achieves overnight social success by pretending to have sex with a gay guy who wants to stay under the gaydar. She’s suddenly, like, popular! As in, OMG! Whataslut! But it all works thanks to a good script and a great cast including 24-year-old “high-schooler” Amanda Bynes, Lisa Kudrow, Thomas Haden Church, Stanley Tucci, Patricia Clarkson, Malcolm McDowell and others. We’ve seen worse.

This third chapter in the “Family Guy ‘Star Wars’” spoof focuses on “Episode VI — Return of the Jedi.” What more can we say? Uh, OK, how about: “You can get all three episodes in ‘Laugh It Up Fuzzball: The Family Guy Trilogy’ for about 40 bucks.” Happy now?

Angelina Jolie is excellent, as always, in this sometimes-great spy thriller. She plays the title character, a dyed-in-the-wool patriot-spy who is accused of being a sleeper-spy by a Russian defector. She hits the streets (Bourne Boulevard, anyone?) to prove her innocence. Never makes a damn bit of sense, but when Angie starts kickin’ butt, a good time is had by all. Fun.

A pair of street dance-squads face off in the World Jam or somesuch; the same as every other dance-competition movie of the last 10 years. This one’s gimmick? It’s available in 3-D so you can see every bone-crushing move in flying super-slo-mo while the rap noise-track churns away. When, exactly, did dancing become so painful to watch?

OK, right up front: This is the stupidest movie we ever saw. Misha Collins, most recently of “Supernatural,” discovers that unusual spikes in the Earth’s magnetic field are coming from … Stonehenge! Which begins to start moving due to … ancient astronauts! So, in usual SyFy logic, he’s the only man on the planet who can prevent it from destroying all of creation. Trust us, this is a bad one. Enjoy.

Fans of Mayberry have been hoping for a really good “best-of” set for years. Most of the compilations have been rather weak, but this is the real deal: a three-disc set with 17 well-chosen episodes, the original Danny Thomas Show episode that introduced Sheriff Taylor, the “Return to Mayberry” reunion movie, a nice retrospective and more.

Ben Affleck once again directs — as in “Gone Baby Gone” — and stars in another thriller. This time he’s a second-generation criminal, a bank robber on that slow slide away from redemption. Until, that is, he falls for a woman he briefly holds hostage. Can he betray his family and friends and become a law-abiding citizen? With a great cast including Jon Hamm, Blake Lively, Pete Postlethwaite and Chris Cooper. Not bad.

Michael Douglas returns as Gordon Gekko, the master money-man who taught us that “Greed is good.” Well, it was good enough to get him sent to prison, and now that he’s out, he’s inspiring a new generation of Wall Street hot-shots, including Shia LaBeouf. Nowhere near the impact of the original “Wall Street,” probably because we no longer see the entertainment in illegal stock manipulations, but a good film nonetheless.