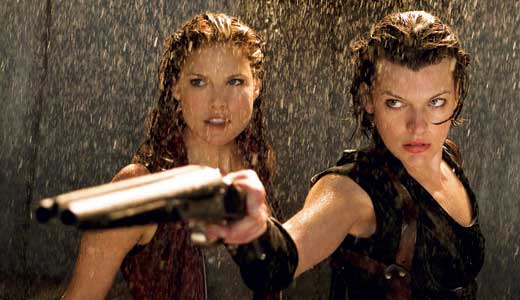 Milla Jovovich returns — again — as the genetically engineered zombie-killing machine, taking her war against the evil Umbrella Corp. to an entirely new level: Blu-ray 3-D! And, giving the fans exactly what they prayed for, she indulges in a 3-D shower scene! OK, it gets cut kinda short, but it is a welcome bit of titillation, none the less. Otherwise, more of the same with Milla and assorted lost souls — including Ali Larter and Boris Kodjoe — blasting their way into L.A. in hopes of finding refuge, or at least something resembling a plot. Of course we liked it!

George Clooney is at the top of his form as a hired assassin who, while laying low in Italy, becomes involved with Euro-Playboy prostitute Violante Placido — who looks damn good nekkid — in this almost dialogue-free thriller. It all ends in a good old ’Merican Western shoot-’em-up, as all films should. Co-stars seriously fine Swedish babes Thekla Reuten and Irina Bjorklund. Man, that Clooney guy sure knows how to live, don’t he? Lots of fun.

AND SOON THE DARKNESS

Breathtaking beauties Amber “Zombieland” Heard and Odette “The Undead” Yustman decide to vacation in a romantic Argentine village where they immediately go bar-hopping. (We have got to get ourselves a new travel agent!) When one disappears amid rumors of white slavery, the other asks Karl Urban to help her search, but comes to realize that he could be a bad guy, too. Like a really great girlfriend, this flick never makes any sense but is dynamite to look at. Recommended.

Boguslaw Linda, the “Polish Bruce Willis,” has been making terrific comedy/action flicks in his homeland for 30 years. Here’s a pair of subtitled offerings that illustrate why he’s so popular. In the first, he goes looking for furniture to please his new girlfriend, leading him deep into ’70s-era Communist black markets, complete with gun-toting salesmen. The second finds him comically robbing a German bank during WWII to buy guns for the Polish resistance.

An evil alien-looking creature with a yard-long talliwacker rapes hookers to death when not hiding in a fetid South American jungle. Think that’s revolting? Well, wait ’til you see the degenerate cop (James Horner) who’s out to solve the crimes! He’s ready to kill, maim or torture anyone within eyesight at the slightest provocation — including a poor pizza-delivery boy for being overly chatty! A truly wretched monster flick with tons of gore, nudity and a sprinkling of Lance Henriksen. What a time to be alive.

No, not that seriously Gumby-inspired horndog movie from 1998, this is an A&E doc on the history and social significance of the fabled Indian “Book of Sexual Positions.” The best part is the Benny Hill effect it had on staid British archeologists when they discovered it.

Idris “The Wire” Elba stars as a former Black Ops soldier, disgraced and living in Brooklyn after his team was betrayed, captured and tortured. And who betrayed them? His own brother, of course. Co-stars Eamonn Walker and Monique Gabriela Curnen.

Fans of WWE’s John Cena should check this out. He plays the prodigal older brother of a 15-year-old boy who left home after causing his father’s death in a car accident. Returning, he helps the awkward, struggling kid find his place in the world by teaching him to … wrestle. Co-stars Patricia Clarkson, Danny Glover and Devon Graye.

Apparently, the end of the world is nigh, because Troma Studios just released this legendary schlocker … on Blu-ray! Poorly written, badly acted and starring no one you’ve ever heard of, this little culter inspired a legion of late-’80s Southern California film students to stop flipping burgers and hit the beach. Stud-bedecked surfer dudes ride post-apocalyptic woodie-wagons in an all-out war with a gun-totin’ grannie with a score to settle. Imagine Frankie and Annette meeting Mad Max — yet it’s all surprisingly tame … for a Troma film, anyway. Enjoy.

THE HAUNTING OF AMELIA

A wonderfully inept and thoroughly entertaining indie horror/thriller starring Chad Lindberg and Brendan Fehr. It’s been a decade since a train killed his girlfriend, but Chad still has haunting visions that keep him out of the dating scene. Then his old high-school bud shows up looking to party, and he decides it’s time to join in the fun. That’s when he meets mysterious waitress Tania Raymonde, who leads him down an even darker path.

Director Joel Schumacher’s big-budget, big-cast drug drama stars Chace Crawford, Curtis Jackson, Emma Roberts, Rory Culkin and Ellen Barkin, all of them either selling or buying “12,” an exotic designer drug that fuels the raves on Manhattan’s Upper East Side. This, of course, leads to murder, prostitution and all the other awful things that make movies so much fun to watch. But is it any good? Well, the studio thought it was such a mess that they added narration by Kiefer Sutherland. Wassat tell ya?