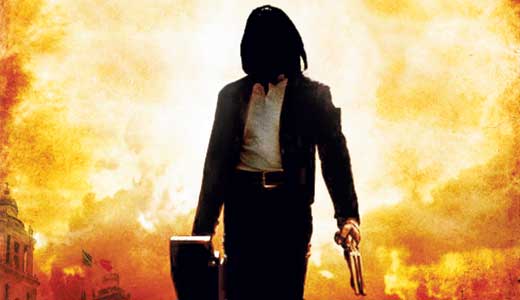 Writer/director Robert Rodriguez stunned moviegoers in 1992 with his debut film, “El Mariachi,” starring Carlos Gallardo as a simple guitar player who must trade his guitar for a gun after a case of mistaken identity. The movie was an international hit, which he followed up with “Desperado” in 1995, raising the sexy quotient by introducing us to Antonio Banderas and stunning Salma Hayek, culminating in one of the greatest shootouts ever filmed. A true masterpiece. Eight years later, he released the capstone of the trilogy with Johnny Depp joining Banderas and Hayek in a far more stylized and refined tale involving the CIA, a drug lord and the supposed overthrow of the Mexican government. All are available now on DVD and Blu-Ray in various combinations. Enjoy.

That purple nightmare takes kids to the zoo where the animals trumpet and roar and bark and squeal — just like your kids! — creating an impromptu orchestra. Ah, give us a break, will ya? It’s a slow week.

Renee Zellweger repays the studio for her Oscar opportunities by stooping to do this silly fem-chiller/revenue-device with an inexplicable R rating. She plays a social worker assigned the case of a little girl with a spooky past. And, of course, the little girl comes to live with her! (Yeah, right.) Then she and Bradley Cooper stand back and let the SFX department run rampant. But we’re not complaining; we love bad widdle kid movies. Stupid, noisy fun.

Steve Carell, Zach Galifianakis and Paul Rudd star in this American remake of the French “The Dinner Game” in which Rudd stumbles across Carell, the perfect guest for his boss’ monthly “dinner with idiots” night. Rudd and Carell have great chemistry for the first half of the film, then Carell and Galifianakis are allowed to run completely amok during the dinner, much of it obviously ad-libbed. Is it any good? Well … some people liked the first half, others like the second. Some didn’t care for it at all, while others peed on the theater floor. Just depends on your own comic bent, we suppose. Definitely worth checking out.

Lions Gate Entertainment has gathered together many of their best thriller/horror franchises and released them in four-packs, way cheap. Some offerings include all four “Leprechaun” flicks (including No. 2, the official “Best Worst Movie Ever Made”), a combined “Cabin Fever” + “Descent” four-pack, and the oddly appropriate “Eye” + “Bug” + “Ju-On” + “Alone in the Dark.” Lotsa good, cheap fun that goes great with pretzels, beer and buds.

INTO THE UNIVERSE WITH STEPHEN HAWKING

While Hawking may look like a Star Trekkian human nightmare, the guy has one of the greatest minds of all time. Still, having him do the voice-synth-narration for this Discovery Channel series was a bold move. Terrific computer graphics and Hawking’s simple-yet-precise prose raise this far beyond the usual cable-TV science fare. Three hours of highly recommended, consciousness-expanding indulgence.

A little-known Animal Planet series about real life people who live and work far closer to the land than you might expect to find in the 21st century.

Most people expected this first release from writer Charles Casillo to be a no-budget thriller — and it is … sort of. It’s also wildly funny in spots, tender in others, violent, sexy and thoroughly unpredictable throughout. A perfect indie movie about life, death and people starring Casillo and Dana Perry.

OMFG! The entire Rocky and Bullwinkle! Almost 62-friggin’ HOURS of moose and squirrel on 18 discs at less than $6 each! That includes 91 trips through the WABAC machine! Fifty visits to Mr. Know-It-All! Thirty-eight treks through the frozen North to save Nell! Yes, a lot of fans are up in arms that the evil marketers previously released Seasons 1-4 individually; then this complete set instead of a Season 5, but we don’t care. Where else are you gonna find this level of entertainment for $1.60 an hour? Stop reading and get your butt to the vidstore, man!

Patrick Fabian stars as an admitted-fraud exorcist who agrees to expose the whole exorcism racket for documentary cameras, but doesn’t bargain on a little devil (Ashley Bell). Not the best “shaky, hand-held, camera-based indie horror film” of recent days, but the climax certainly delivers.

THE SWORD OF SWORDS

A legendary martial arts title, finally available on DVD. A nameless swordsman takes on all comers to win battle with the King of Swords, aiming to take the crown for himself. Includes the infamous bathhouse assassination scene that has kept it out of American home video for decades. Nice.

The studio is dumping this bloody, gruesome Cuba Gooding Jr. serial-killer entry straight to video with as little fanfare as possible, hoping to make a buck while keeping it out of the papers. Sur-prii-ize! He plays a reporter who finds the killer’s journal when his girlfriend is butchered, but every clue seems to lead to a 9-year-old orphan.