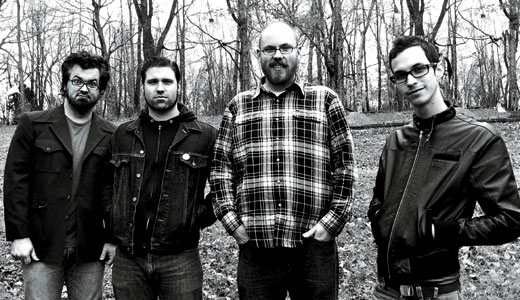 As a railroad conductor and videographer, Alex O’Nan has had ample opportunity to contemplate the concept of travel and film his surroundings.

“To pass the time, I’d always bring my video camera and shoot stuff, going up and down the track,” says O’Nan, 32, drummer and chief songwriter behind Interstates. “When I first started working for the railroad, I’d go to Nashville. Over 200 miles, you see some pretty interesting things.”

O’Nan’s history writing music for Interstates predates his railroad job. In the early ’00s, he founded instrumental trio Of Asaph with former Endpoint and Guilt guitarist Kyle Noltemeyer. Like Of Asaph, Interstates bore nothing in common with ’90s hardcore, rather the layered, cinematic qualities of bands like Trans Am, Explosions in the Sky and The Photographic.

When he wasn’t traveling for work, O’Nan composed the beats and music for Interstates on his computer in Reason, a popular recording software that allows people to sample, or copy, the sounds of real instruments and use them later on. Live, Interstates incorporated projections of footage O’Nan shot on his railroad trips into their show.

Arrival Without Departure is a three-song digital EP that follows their debut long player Run Run. The EP, which comes out Saturday, finds O’Nan stepping away from a solo environment, incorporating new members, and rewriting music for a more streamlined, less electronic result.

Different versions of “Without” and “Departure” originally appeared on Interstates’ debut Run Run but were reworked for the EP entirely by Neil Robins, of Dirt Poor Robins, at his Whitechapel studio. “Arrival” is brand new.

The new Interstates lineup, which also includes Shane St. Clair, plans to record a series of EPs and release them online, with an eye toward making a proper album later next year.

“Before now, Interstates has been sort of a hobby-ish band,” O’Nan says. “Now, with having two guys that enjoy playing music outside of practice, it’ll probably go in a bit of a different direction.”

The first 10 people at Saturday’s show get a free download of Arrival Without Departure.