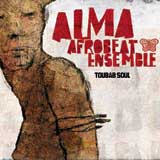 To understand Toubab Soul you must bridge at least three cultures. Chicago composer Aaron Feder formed the group in New Orleans in 2003 to pay homage to afrobeat godfather Fela Kuti. Three years later, Feder had moved to Barcelona to study under John Kwame Adzraku, a Ghanaian drummer who performed with Fela in Nigeria. In recording Toubab Soul, the group enlisted a slew of guest collaborators, including Ugandan MC Krukid and rapper Babacar Gaya, to make the first afrobeat album recorded in Spain. It’s beyond cliché to describe afrobeat as a kaleidoscopic throw-down of players from various backgrounds, but that’s exactly what this is. The fact that the mini-orchestra coalesces without colliding in a train wreck should be celebrated. Also, white shoegazer-core is boring.