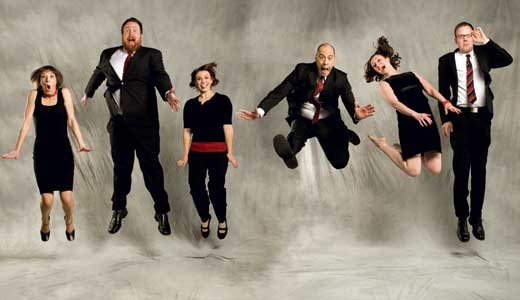 I’ve been seeing flyers advertising this show for over a month, and it took me just as long to realize its logo was poking fun at the city’s seal, and the banana is supposed to be the fleur de lis. Duh. All my life I’ve seen the little French symbol represented on flags, signs, T-shirts and tramp stamps, and I never noticed that it kind of does look like a banana, sure as hell more than it looks like a flower.

Growing up here can cause you to miss things like this, or just never question them, because everything is so familiar. When you think about it, Louisville is funny, and so are we. How much do we freak out about an inch of snow? Why is public intoxication completely acceptable the first week of May? I’m not hatin’ — I love it all. It’s a city worth celebrating and laughing at — which is why The Second City, the renowned comedy theater troupe of Chicago, has written us our very own show about Possibility City: “It Takes a ’Ville,” presented by the Actors Theatre Brown Forman series.

The Second City, celebrating its 51st birthday this year, boasts alumni including Steve Carell, Tina Fey, Mike Myers and Stephen Colbert. Lately, the theater has been branching out from its Chicago home base and creating comedy shows tailored to specific cities. According to Ed Furman, one of the writers of “It Takes a ’Ville,” the series started several years ago when a Second City group toured to Denver and developed a show specifically for and inspired by that city.

“The shows in Chicago used to be mostly Chicago-centric,” Furman explains. “But Second City’s gotten so big that it’s not unusual to have the whole cast and maybe one person’s a Chicago native, because people come to Chicago to do Second City and to get into comedy.”

Once Louisville was selected for one of these customized shows, Furman and the show’s other writer, Tim Baltz, came down for a four-day whirlwind tour. They saw the sites, ate the food, talked to the locals and tried to learn as much as they possibly could in that short period of time in order to create an accurate portrayal.

“You kind of want to, as we say, hold a mirror up to the audience — the audience wants to see themselves on stage,” Furman says.

Before that immersion period, Furman had been to Louisville before but only briefly, and he didn’t know much about the city beyond the usual bourbon and horses impression. What he says he found most interesting was the North-but-South, artsy-but-Bible-y dichotomy. He says we have a nice balance (thanks!), but the visit didn’t offer too many surprises (not surprisingly) except for one he mentioned: “I only heard the word ‘y’all’ twice when I was down in Louisville, and one time I said it, so that doesn’t even count.”

As expected, the show will include spoofs on everything from the Derby to hot browns to the ever-apocalyptic climate of the Ohio Valley. The format will be a customary Second City-style revue — including scenes, songs and monologues all lumped together. The Second City crew may not be Louisvillians, but Furman feels certain they’ve crafted something hilarious that stays true to the ’Ville, because that’s how they roll.

“It’s really about taking the audience for a ride,” he says. “You have to earn their trust, you have to establish that you’re confident. Then you can hit them for a loop with a surprise, because they’ve developed a relationship with the performers, and that’s what we bring. It’s our unique Second City style. I think that’s why these shows are so successful. We’re delivering something that really only Second City can deliver.”

Directed by Furman’s longtime friend, Mick Napier, who hails from Hazard, Ky., “It Takes a ’Ville” has been a collaborative project that Furman says he was happy to be a part of. Louisville is now added to the list of these customized revues alongside Denver, Atlanta, Boston, Philadelphia, Pittsburgh, Arizona and Cincinnati, with shows about Rochester and Baltimore on the horizon.

“I’m excited to see the show up on its feet,” Furman says. “And I hope everyone in Louisville likes it, because Tim and I certainly love the town, and this is one of the gigs you certainly want to do well, because we love the people, love the city, and we want to give you something y’all will really enjoy.”