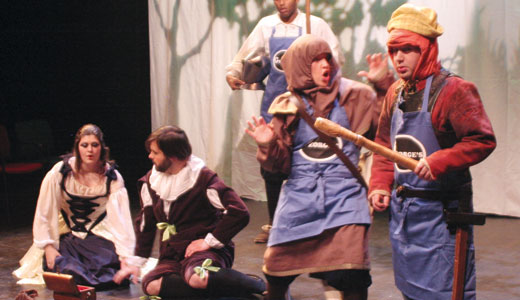 The Knight of the Burning Pestle
A production by the Savage Rose Classical Theatre Company. Directed by J. Barrett Cooper. Continues through Dec. 11 at the Kentucky Center’s MeX Theater. For tickets or more information, call 584-7777 or visit www.savagerosetheatre.com.

Summing up the plot of Francis Beaumont’s “The Knight of the Burning Pestle” is a daunting task. First performed in 1607, the play seems to be about a young couple in a forbidden love affair. A young man expresses his love for his boss’ daughter and gets fired, whereupon he and the young woman make a plan to elope. And it’s a constant up and down. There is true love, fake death, kidnapping, singing and giants. But really, the play is about a rude couple in the audience who buys off the theater company because they want to see the young man who works in their grocery store as the hero of the play.

The plot is certainly engaging, but most of the production’s humor is found in the breaking of the fourth wall, as the grocer and his wife continue to interrupt the play. They whisper their opinions, shout to hurry scenes along and, at times, attack a character they dislike. Thanks to J. Barrett Cooper’s direction and the hilarious performances of Craig Nolan Highley and Kelly Moore, the show moves at a high speed.

Highley and Moore lead a strong cast. Neill Robertson, Katie Scott and Tony Pike shine in their roles, and Tom Schulz, as the title character, lives and dies with gusto. They all draw from a seemingly endless reservoir of energy, and demonstrate a firm grasp of the 17th-century language.

Cooper directs the show in a way that shows off the wit and physical humor in the script, and he never condescends to the audience. It’s quite lively for being such a long play. There were a few moments that lagged, but they didn’t detract from the overall energy of the production.

It’s clear that Shana Lincoln was creatively engaged in her approach to costume design. The fabrics and lines fit the characters, and the costumes reflect the mixing of different worlds. When the contemporary Rafe (Tom Schulz) becomes the Knight, his costume combines period elements with a grocer’s uniform. Quick costume changes allow actors to play multiple characters.

Many people may assume that classical theater is boring and dusty, and that a play written 400 years ago has the potential to be stale and uninteresting. But they’re quite wrong … at least in this case. Savage Rose’s fun and energetic production of “The Knight of the Burning Pestle” is anything but dull.