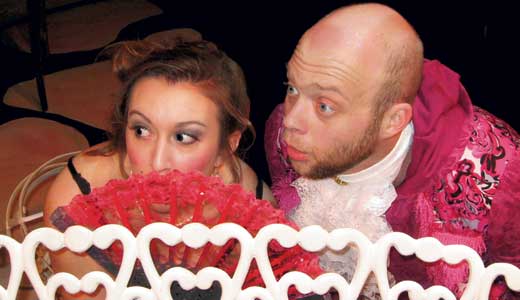 Pandora Productions has a history of pushing the envelope, of breaking with the traditions that hold other theater companies back. Their production of “Measure for Pleasure” is no different.

David Grimm’s play is about a young servant, Will Blunt (played by the charming Joseph Hatfield), who’s in love with a cross-dressing prostitute, Molly Tawdry (Mike Slaton). He gets her a job as a maid for his boss, Sir Peter Lustforth (Lucas Adams), who wants to leave his wife for Hermione Goode, a younger woman played by Leah Roberts. His best friend, the lothario Captain Dick Dashwood (Zachary Burrell), also is in love with Goode. After many situations of lust and love, confusion and mistaken identity, everyone lives happily ever after.

The language in the play is in not-too-subtle verse, which makes this comedy of manners a lot of fun — and the cast is clearly having a ball. Even though “Measure for Pleasure” is not a classical piece — the strictness of social classes is swept aside for the purposes of humor and plot — it seems the production as a whole is missing a certain precision. Michael J. Drury’s direction allows for broad jokes and extreme physical situations onstage (this is not a play where moments are lost to subtlety). In these extremes, the production lacks the confinement of the era in which the play is set. Some of the blocking seems arbitrary, causing the production to miss even more opportunities for physical comedy.

It’s a strong cast, however, and Hatfield’s love-struck goofball leads the way. Slaton is sweet, and Adams and Greylyn Gregory are ridiculous in the best possible way. Nancy Hoover, as Dame Stickle, has some great, shocking moments, and Burrell’s performance lives up to his costume. It’s Roberts who finds the comedy in almost every moment she’s onstage; her lines, actions and expressions are crisp and spot-on.

Donna Lawrence-Downs’ costumes are contemporary and classical, serious and fantastical. She has magically created a wardrobe with the perfect balance of the 1980s and 1880s. Set designer Karl Anderson seems to have attempted the same, but it doesn’t quite work. The statues and stone walls in the final set work with Theresa Bagan’s lighting, but throughout the play, the realistic and contemporary aspects of the set are subtle and plain, which the play is not.

“Measure for Pleasure” is full of both light fun and shocking moments. For all the chaos this production offers, for all the running around and crude jokes, there are some sweet, genuine moments and great performances that make up for its faults.