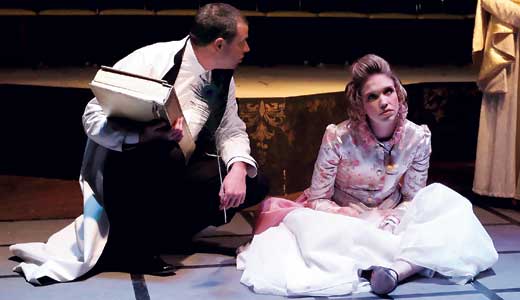 The Looking Glass Wars
Produced by the Alley Theater in the Art Sanctuary space at The Pointe, 1205 E. Washington St. Directed by Scott Davis. Continues through Dec. 18. For tickets or more info, call 713-6178 or go to www.thealleytheater.org.

An old saw compares making sausages with making laws, and warns that people of faint heart are well advised not to watch either process until the finished product is all ground up. And yet, lots of intrepid folks are endlessly fascinated by the processes themselves.

Making plays is another process from which some people are better off averting their eyes: read-throughs, rehearsals, tech rehearsals and workshop productions can be tedious affairs. But they can also shed light on the narrative, structural, performative puzzles that are at the heart of playmaking. People who like those puzzles will find much to think about in the Alley Theater’s workshop production adapted from Frank Beddor’s novels, “The Looking Glass Wars.” The Alley Theater’s production, adapted by Todd Zeigler and the cast (aka The Bad Actors’ Club), is in the midst of a two-weekend run in the Art Sanctuary space at The Pointe.

So here we have an adaptation of an adaptation (still another adaptation — for film — is also in the works). In the novels, Beddor (perhaps best known as the producer of “Something About Mary”) mashes up Lewis Carroll’s children’s classics — “Alice’s Adventures in Wonderland” and “Through the Looking Glass” — and creates a new work that retains superficial connections to the originals (a place called Wonderland, a girl sometimes known as Alice, a Hatter, a Red Queen and the like) but builds a narrative based on the conceit that Alyss (as Beddor has it) is a princess in Wonderland. Forced to flee by a murderous coup, she enters the “real” world via a portal called The Pool of Tears. In the real world, her tales of Wonderland are met with disbelief, and a writer named Charles Dodgson (better known to us as Lewis Carroll) listens to her stories and betrays her trust by treating them as if they were mere fantasy. After time and various misadventures, Alyss returns to Wonderland, is embraced by her followers (the Alyssians), and joins battle with the Red Queen.

If it sounds convoluted — and this synopsis barely scratches the surface — it is. And yet, despite a blurred narrative arc (especially in the opening scenes, when characters are plunging back and forth between worlds faster than you can pull a white rabbit out of a top hat), the adapters and director Scott Davis convey the germ of the idea with enough clarity that even a reviewer who has never opened one of Beddor’s novels could follow along.

The physical set is minimal; computerized images projected on four fabric screens are used to establish locations (and to host interactions between characters on stage and virtual interlocutors). It’s a mostly effective solution (devised by Davis), shaping mood and atmosphere, and on opening night, the synchronization between real and virtual events was outstanding. Costumes and wigs and makeup (by Rachel French and Bridget Witzke) were gaudy and fun. Lighting (by Davis and Theodora Collins) was nicely atmospheric.

Despite the fact that the script is constantly undergoing changes, the cast was quite strong, especially those with physical and sinister roles: Witzke roared enthusiastically as a Red Queen with a penchant for beheading her enemies; Tony Smith was an agile, quick-witted Cat (whose nine lives come in handy); Gregory T. Fugate embodied sleazy treachery as the Jack of Diamonds; and Kenn Parks battled mightily as Hatter Madigan. Over time, Hallie Dizdarevic’s Alyss morphed from a pouty adolescent to a noble leader; April Singer’s turn as Homburg Molly was fun to watch; and Todd Zeigler, Madeleine Miller, J.P. Lebangood and Emir Dizdarevic turned in solid performances. Special credit goes to the entire cast and fight choreographer Tony Smith for mounting a series of energetic battles (including plenty of swordplay) without injury to one another or the audience.