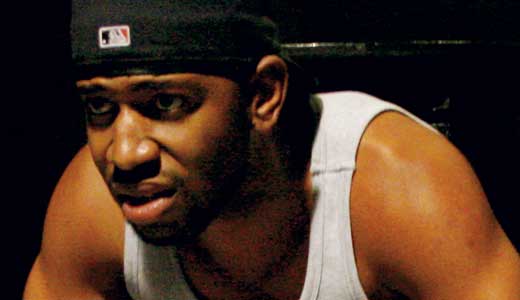 Before Whoopi Goldberg was picking up awards (including a Grammy), hanging out with Oprah on the set of “The Color Purple,” channeling the ghost of Patrick Swayze, or getting into bitch brawls on “The View,” the dreadlocked, eyebrowless legend started out like a lot of young actors — OK, well, most young actors haven’t worked in a funeral parlor — doing improv, trying to get cast, and working on her stand-up comedy. It was when she was performing her one-woman show, “Spook Show” (later remounted and renamed “Whoopi”), that the entertainer was discovered in California.

Gary Brice, Triza Cox and Brady Carnahan are all theater students at the University of Louisville and all have written — or are writing — their own one-person shows. Whether they’re exploring historical, political or personal themes in their projects, each of the pieces showcases something about themselves as actors and gives them a break from the constant crusade of trying to get cast.

Brice already has two one-man performances under his belt, and both situations were unexpected. He performed his first show, “Hangman,” when everyone in his theater troupe bailed on him the week before a performance, and he was forced to come up with something. An undergrad at the time, he used what he’d learned in his African-American history class and a course on stage makeup to develop a piece on lynching in the South.

“I had to do something,” he recalls. “I just got this idea, I started writing … it killed me. But I put it together, and I performed it.”

Brice premiered his newest show, “The Heights,” last spring as a last-minute addition to a U of L Studio Theater performance. He developed the piece as part of an assignment for a play interpretation class. The assignment was based on Heather Raffo’s play “Nine Parts of Desire,” in which nine female Iraqi characters from different backgrounds and social classes weigh in on the war. Brice’s project addresses gun violence in Chicago, from the points of view of three young men of different ages and from different social classes, all played by Brice.

“‘Nine Parts of Desire’ is about a war, a very real war,” he explains. “I was thinking about what kind of war goes on in America, and there’s a war on the streets in a lot of these cities.” The topic of gun violence in Chicago came up repeatedly while he was an undergrad at Western Illinois University because it had directly affected so many of his peers. He didn’t expect to perform the show so soon after writing it, but the U of L Studio Theater coordinators saw him perform the piece at an open-mic night and snatched him up. In the show, he uses a baseball cap, worn different ways, and stands on three different parts of the stage to differentiate the three characters: Ka’mil, Ka’val and Kelvin.

“It’s really interesting, because I wasn’t worried about the language until I saw the audience,” he says. “I was like, ‘Oh god! This is a middle-class, white audience. I drop the N-bomb like 40 times!’ But one woman said, ‘I appreciated how real it was. You didn’t sugarcoat it at all.’ And the theater is supposed to be a place where you can say what you want. It’s art representing life. I just wanted to stay true to it completely.”

One of Brice’s grad-school cohorts, Triza Cox, took a similar approach but on a different subject, with her art representing her own life and the lives of family members. She produced one show in her South Carolina hometown in 2008, called “Lookin’ for Love,” and is developing her second piece.

“That show was about a bad relationship,” she explains, “which is kind of funny, because now, I wouldn’t even want to talk about bad relationships in public, but (at the time) I was like, ‘I’ve got to put this out there. I’ve got to tell everybody what I went through.’” But she didn’t write and perform the show just to get emotional baggage off her chest. Currently working on her second piece, “Broken Wings,” based on stories about the civil rights movement passed down from her relatives, Cox is drawn to the idea of a one-woman show because she feels it gives her a special kind of freedom as a performer.

“It built up my confidence in realizing that I could trust myself as an artist to write a one-person show, to perform it, to keep an audience’s attention and say what I needed to say,” she says. “I think that’s my big attraction to one-person shows, because you can feel pretty powerless as an actress. It’s getting harder and harder to find plays that are necessarily doing everything you want to do as an artist and giving you the chance to stretch.”

Brady Carnahan is stretching himself in a different direction with his project by merging his love of acting with his interest in history. He’s working on a one-man, three-character show about Floyd Collins, a caver who was trapped in Mammoth Cave in 1925. Carnahan, who hails from Tomkinsville, Ky., selected Collins’ story because he wanted to do something that catered to Kentucky. Still in the research stage, he travels to the Mammoth Cave area often to collect information.

“I pulled every newspaper I could get my hands on,” he says. “Every archive, everything that says Floyd’s name on it — we have it somewhere. It’s a very hands-on project.”

Carnahan, who has performed off and on with the Monroe County Theatre Company since 2003 and is studying theater at U of L, made it his mission to perform in anything that would cast him, but he prefers doing serious works. With the Collins piece, he not only wants to retell the story, but also move the audience. And he doesn’t need anyone else on stage with him to do it.

“I knew I wanted to do a one-man show for a number of months,” he says. “I really liked the idea of one person being able to take on an audience for an hour or so, captivating them and keeping them with the actor or performer.”

Brice, Cox and Carnahan are responding to the difficulty of getting cast and making it as a young artist by creating their own work. They feel it’s becoming a trend — especially among young actors.

“I think solo performance is great for actors, because it’s something nobody can take away from you,” Brice says. “It’s something that you can do, and you don’t need anybody else to do it.”