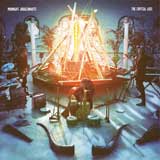 On their second album, the Melbourne, Australia, trio of Vincent Vendetta, Andrew Szekeres and Daniel Stricker concocts a potent mix of new wave, disco and dance, following their 2007 breakout hit, Dystopia. The Crystal Axis is presented as a concept piece overflowing with interstellar blasts, “Lara vs. the Savage Pack” being one of many examples. “The Great Beyond” shimmers thanks to a space-age harmony chorus, while the aboriginal drum break in the middle of “Vital Signs” and “Virago” is a split personality of modernity and age. Because they love to dance, Midnight Juggernauts reach boldly for the territory between Pink Floyd’s tense bridges and Bowie’s glam (“Dynasty”) and pop (“Winds of Fortune”) songs as needed. Occasionally, the vocals struggle to match the group’s ambition, but that’s far from a deal-breaker.