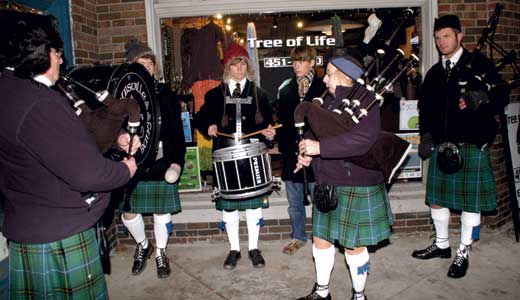 Operas get changed around all the time. Sometimes they’re set in new locales, or updated a century or two, or maybe they leave the costumes in the trunk. In that tradition, the U of L School of Music Opera Theatre is presenting a new version of Georges Bizet’s “Carmen” at The Rudyard Kipling. The production will be sung in English and performed in a single act that lasts only an hour. (The original “Carmen” has four acts and lasts a lot longer than an hour.) At the Rud, the cast is pared down to just five actors who move about and interact with the audience. Bethany Stiles sings the title role of Carmen, the beautiful and beguiling gypsy girl of Old Seville. Or maybe now it’s New Seville. —Bill Doolittle

I know I should be grateful for the liberty to claim control of my own life and for having options, but lately, I think “decision” is a foul word. Calling the shots is so much pressure. Perpetually on the fence, I’m a pain in the ass to make plans with. But really, our lives are full of the Big Ds — important, trivial, favorable and harmful. Artist John McCarthy’s ceramic sculptures explore how we make decisions, and what the results of these choices are, be they positive or negative, critical or inconsequential. Some of the works celebrate specific people and their contributions to society, such as Louisville’s Anne Braden. Additionally, Interfaith Paths to Peace’s “Peace Postcards” exhibit will be on display in the Garden Gallery (www.peacepostcards.org). —Jane Mattingly

Ladies and gentlemen … it’s Buddy Gilm! On Friday, for one night only, the (sort of) legendary radio host Buddy Gilm will perform live at the Alley Theater. Accompanying Gilm will be his sidekick of nearly two decades, Jerry Jenkins, and, of course, the show’s self-proclaimed best bandleader in the world, Battle Axe Adderall. Gilm also welcomes Gill Holland (Green Building owner, film producer and Louisville Magazine’s 2009 Man of the Year) for a sit-down interview, on stage and in person. Bodeco and Johnny Berry & the Outliers are the musical guests for this evening of entertainment that harkens back to the radio shows of yore. The performance is brought to you by the Louisville Improvisors. —Brent Owen

The regular Bardstown Road Aglow event gets a nice kick in December as Four Roses bourbon steps in as an official sponsor. That’s right — Bardstown Road Aglow, but on bourbon. As usual, boutiques, restaurants and galleries along Bardstown Road, Baxter Avenue and the Douglass Loop will offer entertainment, food, drinks, special discounts and more. There will be a Four Roses cocktail contest as well as Bluegrass Brewing Company beer specials along the way. Heck, there will even be a couple trolleys full of elves cruising the strip to really holiday it up. Bourbon, beer and elves? Sign me up. —Kevin Gibson

A literary party of considerable proportions, filled with memorable individuals. Second Story Books is dedicating Saturday evening to a reading/signing/celebration of Dennis Covington, along with a couple of other special guests. Covington’s career has taken up various threads in both fiction and nonfiction, writing everything from magazine and newspaper features to plays and young-adult novels. The biggest factor distinguishing Covington from other wordsmiths is his twinned depths of sensitivity and commitment. Prior to his award-winning book “Salvation on Sand Mountain: Snake Handling and Redemption in Southern Appalachia,” he didn’t just attend the odd services — he developed close friendships with congregants and took up serpents himself. In a different dive into dangerous waters, he wrote alternating chapters of “Cleaving: The Story of a Marriage,” one of the most devastating relationship memoirs ever. Rounding out this enriching evening are poet Jeffrey Skinner and singer-songwriter Danny Flanigan. —T.E. Lyons

Louisville native Sharon Loy returns home this weekend to talk to your pets. Loy, a high school art teacher-turned-animal communicator, will appear as part of the Puss & Boots Holiday Shoppe benefit for the Shamrock Foundation, to be held at the American Legion Highland Post on Bardstown Road. Loy helps people connect with their animals better, and provides instruction on how to eliminate unwanted behaviors. Loy will be on hand to answer questions, do some readings and register pet owners for her upcoming basic animal communications class. If you’re trying to get Sparky to stop drinking from the toilet, Loy may be your answer. That, or just keep the lid closed. —Kevin Gibson

You know the holiday season has officially begun in Louisville when the Louisville Ballet performs the classic “Nutcracker” by Tchaikovsky. This year is the second season for the revamped version, now called “The Brown-Forman Nutcracker.” Choreographer Val Caniparoli, designer Peter Cazalet and illusionist Marshall Magoon have all made an old time chestnut (it’s been around since 1892) sparkle anew with even more magic and fantasy. “Nutcracker” has always been special for children, partly because there are more than 100 of them playing angels, soldiers and mice. To enhance the “Nutcracker” experience, the Louisville Ballet is hosting an opening night celebration on Saturday, Dec. 4, as well as two Sugar Plum Parties on Saturday, Dec. 11 and Sunday, Dec.19. —Jo Anne Triplett

Perhaps Scott Lucas is still fuming, or he’s warming up to more sophisticated means of channeling aggression. Lucas is known for his tenure in Chicago power duo Local H, but his solo outing and four-song EP, The Absolute Beginners, named after the David Bowie song (“the most romantic song ever written,” Lucas says), centers on depth rather than power. They’ve matured at warp speed since George Lassos the Moon arrived back in February, with violin, accordion and organ complementing their bandleader’s smoky baritone. Local H fans won’t feel abandoned on the new EP, as he reworks “Hey Rita” off 2004’s Whatever Happened to PJ Soles? Opener Rude Weirdo is overdue for an encore to their ballsy post-punk Louisville Lip release, Every Girl in the Shower. —Mat Herron

Pecha-what? No, it doesn’t necessarily involve hippies or anime — but it might. A Japanese term for “chit-chat,” Pecha Kucha events were created for creative folks like artists, architects and designers to meet up, hang out, have adult beverages and share ideas. Presenters, who are chosen in advance, will share what projects they’ve got cookin’, but here’s the fun part — it all happens really fast. To keep things rolling and to avoid spotlight hogging, all presentations must stay within the 20-by-20 format — 20 slides, 20 seconds each, and no more. Presented by Urban Design Studio, Bernheim Forest, 21c Museum and the Central Kentucky Chapter of the AIA, this will be Louisville’s second P.K.N. — the first was held at Bernheim back in August. —Jane Mattingly

‘Return of a Whiskey Legend’

Did you know that Four Roses bourbon had one of the first neon signs in Times Square? Or that it disappeared from store shelves here for 40 years? “Four Roses: The Return of a Whiskey Legend” details the fine bourbon’s early history, brief hiatus and return to the market. Written by brand ambassador Al Young, who will be at the release party Wednesday at the Filson Historical Society (which, yes, includes bourbon samples), the coffee-table book coincides with the 100th anniversary of Four Roses’ main distillery building in Lawrenceburg. “In addition to Four Roses being the only distillery to produce 10 distinctly different bourbon recipes, the brand’s history is extraordinarily unique,” Young says. “We conquered, we disappeared, and now we’re back.” Reservations are recommended. —Sara Havens

Competent hands and good ears have bestowed upon this pop world a Panorama, the latest album from San Francisco’s intelligent four-piece Birds & Batteries. Visiting Louisville way more often than they probably should, given their Bay City HQ, Mike Sempert, Christopher Walsh, Jill Heinke and Brian Michelson know how to get to the point and turn pop clichés on their heads quickly enough to keep indie pop’s fickle audience engaged. On record, the three-piece horn section and string quartet add sparkle to what was already brilliant in the first place, but you won’t miss that ornamentation much in a live realm. Providing the contrasting crunch to B&B’s color are former tour-mates Workers, which is tracking its as yet untitled forthcoming album with partner in crime Erik Wofford. —Mat Herron

Longtime exhibition-mates Stephen Irwin and Chris Radtke are back with another insightful art show. Their work conceals more depth than is evident at first glance and is always worth another look (or 10). Irwin creates his pieces by altering pages from vintage magazines, eliminating parts of the pictorial to produce faint images. “Notes on Self” is Radtke’s continuing exploration of her personal space. In the past, she has used boxes and glass shards. In this show, nylon mesh was sized to Radtke’s height, width and depth, then paired around a pink center. There will be a reception during the Dec. 3 First Friday Trolley Hop from 5-8 p.m. —Jo Anne Triplett