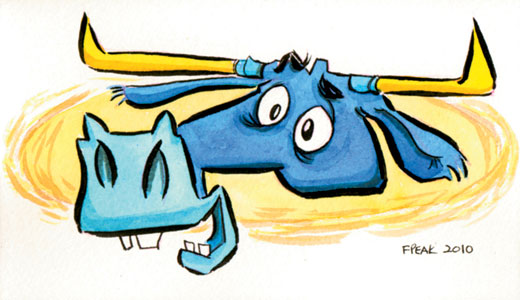 Think “Sanford and Son” meets “It’s a Wonderful Life” and you’re close to drawing a bead on “A Salvage Yard Christmas,” being staged through Dec. 19 by the Bunbury Theatre Company. In the third installment of Juergen K. Tossman’s “Salvage Yard” series, the old salvage yard has been turned into a pawn shop. As one might guess, things are not going well, and the miserly landowner has decided to tear it down. A heartwarming holiday miracle ensues. One interesting twist on this production is that most of the items seen onstage are up for silent auction, and audience members will be able to bid on the items after the performance. Personally, I’m hoping to plunk down $10 on a bottle of Ripple. —Kevin Gibson

Pablo Francisco walks a fine line between unpredictability and consistency. He is the physical embodiment of what happens when you blend a high-energy stand-up with spot-on impersonations of people like Arnold Schwarzenegger, Howard Stern and Danny Glover. You may remember Francisco as a featured cast member on “MadTV,” and later as a regular on Comedy Central’s “Mind of Mencia.” Since those days, he has been focusing on his live performance, playing to sold-out comedy clubs and theaters around the country and the world. This weekend, he returns to Louisville with all new material guaranteed to make The Improv’s audience howl. —Brent Owen

Imagine “Alice in Wonderland,” except as an epic action tale with a more complex plot performed live on stage. And think about what it would be like if Lewis Carroll got it all wrong, and our heroine’s Wonderland escapade was less cute, trippy and random, and she got screwed out of her princess status, and goes seeking revenge. Curiouser and curiouser. The Alley Theater presents the world premiere of “Looking Glass Wars,” based on Frank Beddor’s young adult novel, which reveals what really happened to Alyss (not Alice). Perfect for showcasing the Alley’s unconventional approach to theater, this intriguing rendition of the familiar tale incorporates digital effects, martial arts and interactive video, plus a few more surprises. —Jane Mattingly

This kind of immigration breaks no laws: Madrid comes to the Marriott on the second Friday of each month at Blu, where the menu is built around Mediterranean fare. Between bites of paella and tapas and swigs of sangría, dancers Diane Dinicola and Paula Collins, founding members of Flamenco Louisville, singer Suzanne Allen and guitarist Paul T. Carney open a window into flamenco’s world of seductive rhythms and fiery choreography. The Friday programs will include special guests; this week, it’s dancers Larissa Mora and Grace Mican-Work, who has studied flamenco since she was 6 years old. —Mat Herron

Their songs hew closest in style to Americana — but Over the Rhine have presented themselves, their albums and their tours with the adventurousness of art-pop darlings. Louisville’s often had a front seat as a first tour stop from this Cincinnati ensemble. Over the course of two decades, we’ve seen husband and wife Linford Detweiler and Karin Bergquist take the reins of the group and achieve the rangy and epic (2003’s classic Ohio), but there’s always a lot of musical intimacy when OtR appears in front of a ready audience. In recent years, the group delivered a holiday record, consisting mostly of original material, that’s likely to get a lot of play when they hit the Bomhard Theater stage. Their other recent record is The Trumpet Child, which features emotionally direct songs that showcase singer Bergquist’s light rasp amid shambling horn arrangements. —T.E. Lyons

As a teenager, David and the Mayfields relocated from northeastern Ohio to Nashville, where the future upright bassist would sing with his father during graveyard shifts at a machine shop. An audition for country impresario Andy Griggs changed the game plan, and David wound up touring and performing at the Grand Ole Opry, then recording with kid sister Jessica for her album With Blasphemy So Heartfelt, which in turn led to a sit-in performance alongside The Avett Brothers. With Jessica’s recent signing to Nonesuch and the critical success of Letters in the Deep from his own bluegrass-plus quintet Cadillac Sky, success is beginning to run in the family. Mayfield is ensuring little downtime on this current solo tour, which will find him opening for the Avetts on New Year’s Eve. —Mat Herron

With the advent of the Christmas shopping season comes the inevitable consumerist psychic backlash: Did the reindeer comforter set I purchased at Wal-Mart cause a dozen Chinese kids to work overtime? A sad but inevitable consequence of globalization … Fortunately, the fine folks at Rainbow Blossom have your guilty liberal conscience covered: Their Green Gift Fair features dozens of local vendors, artists and eco-friendly local businesses — including Old Louisville Candle Maker, MadPixel Art & Design, Just Creations, Lady of Assemblage and Red Hot Roasters, among many others. In addition, there will be Kentucky Proud gift baskets for sale, as well as complimentary chair massages — the perfect outlet for releasing any holiday shopping stress, aside from drinking a gallon of soy eggnog. —Jonathan Meador

Sometimes when I see the Colgate clock beaming the time to us Louisvillians from across the river, I feel bad for Indiana. Here they have this gigantic (its diameter is 40 feet), original, functional, cool piece of history, but it’s pointed toward us, for our benefit. I suppose a thank you is in order, and learning about the history of the Colgate-Palmolive Plant in Clarksville is probably the right thing to do. The documentary “Clarksville’s Colgate: Prison to Present” will be shown Saturday at the Falls of the Ohio. The film explores the origin of the building as an Indiana State Prison (1846-1921) and its transformation into the eventual soap-making factory. The clock was first illuminated on Nov. 17, 1924, and is the seventh-largest clock in the world. That’s what time it is. —Sara Havens

This Christmas, I’m saying no to gift cards, smelly lotions and mind-numbing gadgets. I’d actually like to take a pass on the entire holiday, but the holly-and-mistletoe-oozing freaks around me have denied my request. Jolly bastards. So I’m going to keep my bucks here in town by shopping local. Lucky for me and the folks on my list (fleur-de-lis cutting boards for everyone!), the annual $20 Art Show is Saturday at the Clifton Art Supply. No malls, screaming kids or frightened men in Victoria’s Secret to mess with. The show features work from more than 20 local artists, and everything is $20 or less. Participating artists include Ashley Brossart, Natalie Sud, Sean Garrison, Ron Jasin, Terry Tapp, Jill Morgan, Suzanne Edds, Gary Bell and Scott Scarboro. —Grinch Havens

I had to consult a dictionary after reading the title of this exhibition. What’s a selkie? It helps to know textile artist Penny Sisto was born on the Orkney Islands of Scotland. She grew up hearing selkie stories — legends of seals that become human, then return to the sea after transforming to seals again. Her quilted wall hangings tell these often tragic stories.

Ann Lawson Adamek’s watercolors — the “lifescapes and seascapes” part of the show — are more straightforward. “The process of watercolor painting is a journey of self-discovery,” she says. “I want my paintings to invite emotional connections with oneself, with nature, with all of life. I have always loved the concept of interconnections.” So it makes sense that the seascapes are hung beside the selkies. The stories continue. —Jo Anne Triplett

Photographer John Faulkner was on a mission: “The intent was to capture that moment of pure ‘BS.’” Where did he find it? On “Law & Order,” of course!

“I found the interrogation scenes … hilarious,” he says. “The work was an experiment of photographing moments of ‘lying, dying and crying’ of the B-list characters under investigation on the TV show.”

He then printed them on hand-made seeded watercolor paper with torn deckled edges. “(It) adds real grit to the images,” he says. In this context, the images are funny. But Faulkner makes the exhibition personal to the viewers by reiterating that we, too, “know drama.” —Jo Anne Triplett

Did you know Ultra Pop had art shows? If you didn’t go Bardstown Road Aglowin’, or you did but you missed the Pop shop’s opening reception for illustrator Frank Peak, it’s cool, because it’ll be up for the rest of the holiday shopping season, or until it sells out. I know it was a long time ago, but you might recall the Sept. 1 issue of LEO with the illustrations of Charlie Strong and his House of Cards. That’s our guy (the illustrator, not the coach), and he’s back with an Old West-themed series of illustrations. A resident of rural Kentucky, Peak’s portfolio includes everything from illustrations for hunting books to a new blind box series of handmade plush toys, called “Peep Squeeks.” —Jane Mattingly