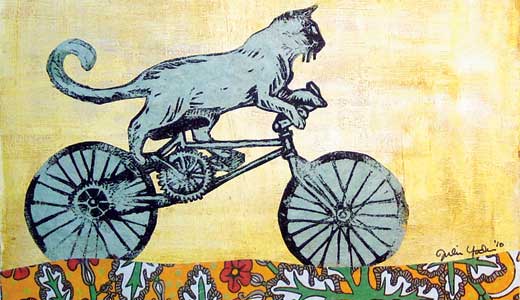 Born and raised in New Hampshire, Jamie Kaler went west to be a comedian, but ended up a naval officer, which he now refers to as his “first world tour.” Realizing “Top Gun” was more fun as a movie than as real life, he resigned his post and decided to try acting. He nabbed spots in shows like “How I Met Your Mother,” “Monk” and “Robot Chicken,” as well as films including “The Family Stone.” Kaler signed on to TBS’ “My Boys,” one of the best ensemble shows in all of television (alongside fellow stand-up comedian Jim Gaffigan). When he isn’t shooting the show (or launching his new Sirius XM show “Kaler”), he spends many nights in comedy clubs across the country making audiences laugh. He will be performing this weekend at The Improv. —Brent Owen

Not to overanalyze, but punk kids always did have different sensibilities about how rock ’n’ roll could and should be executed. And when they take on rap as a medium, witness. Cougar Express spells arena rock in all caps, falling somewhere between Mountain and AC/DC, but it’s also a chimera. At more than one show, singer-guitarist Johnny B. has broken character to unveil Dirty J., a tracksuit-wearing MC spitting an illicit batch of sex rhymes, for a throwback to the days of G-strings in Too Short videos. Sandwiched between this change-up are Natives, the new project featuring DJ Sam Sneed, Lucky Pineapple manager McKinley Moore and members of Invaders. —Mat Herron

If anyone was caught on Shelbyville Road near the malls on Saturday afternoon, they endured the same road-rage-fueled hell as me. I was merely trying to get to Best Buy for a satellite radio antenna — but what should have taken 15 minutes turned into a 60-minute, fender-to-fender, head-throbbing industrial rave. I had to make a pit stop at the BBC just to come down.

With each passing year, it seems the orgy of bourbon, gambling and mindless self-indulgence we call the Kentucky Derby grows more expensive and is thusly placed further out of reach for the common men and women of this city: When beers costs $7 and the infield has a VIP section, you know something’s seriously wrong here. I mean, Churchill Downs isn’t Keeneland (yet) … Additionally, with the elimination of Broadway cruising, the city effectively killed what amounted to the African-American community’s contribution to the weeklong Derby Festival, making Derby not only a rich man’s party, but a rich white man’s party, at that. The always eloquent Affrilachian poet Frank X. Walker will address this and other elements of Derby’s inequities with a lecture titled “Giving the Derby Back to the Black Community,” Saturday at the Park DuValle Education Center. —Jonathan Meador

Bloomington rootsie Davy Jay Sparrow and his band, the World Famous Drovers, are on their third round of honky-tonk on the band’s most recent album, The Bottom of the Barrel. When he isn’t regaling children with stories about why cowboys sleep in their boots (several YouTube clips are on his site), Sparrow goes strictly barroom with his whiskey-worn voice, telling tales of woe and restlessness, and you feel as if you’re descending right along with him into that fifth of Maker’s. On Friday, Dec. 17, he’ll appear live on the WFPK show “Woody’s Roadhouse,” alongside host Woody Chancy, at 11:45 p.m. —Mat Herron

Kentucky’s a storied place. The literary talent that makes its home here produces fictions both epic and intimate, and keeps lovers of non-fiction fascinated. Barnes & Noble at the Summit has gathered together a range of authors whose recent works run all over the map (metaphorically and geographically). “Bluegrass Book Day” will see 10 authors sharing a Sunday afternoon. Their subjects can be as ripped-from-the-headlines as Billy Reed’s “Louisville’s KFC Yum! Center: A Community’s Dream Realized” and as timeless as Gerald R. Toner’s “The Christmas Turkeys and Other Misadventures of the Season.” James Markert is presenting “The Requiem Rose” — the first of an intended series of novels focusing on Waverly Hills — while others will appeal to those who want the straight scoop on local history and culture. —T.E. Lyons

“Pursuing the Masterpiece” is a lesson in museum acquisitions. Curators, whose job is to know what the museum owns, also have to know what the museum needs if it is to educate the public. For most of us, a museum is the only place where we will see work by bygone old masters, get “transported” to another continent, or converse with a contemporary artist. This exhibition is the result of those wish lists. A good example is the acquisition of a royal tunic and cap from the Yoruba tribe in Nigeria. Speed director Charles Venable realized it would be a stellar addition to the other Yoruba pieces the museum already owns. The other acquisitions are a lithograph by Cézanne, “Restore” by Sam Gilliam, a Kentucky sugar desk, and Ruthart’s “Adam Naming the Animals.” —Jo Anne Triplett

You still think buying fantastic art is only for rich people? Humbug! If you’re low on cash, or want to get Uncle Roy something besides another Garfield tie for Christmas, or just can’t stand the sight of that bare wall any longer, Liberty Tattoo might be able to help. Featuring work by local artists Julie Yoder, Robby Davis, Jillian Geralds and many more awesome folks, this month’s show offers artwork ranging from $1-$50. A fun time to check the place out might be at their holiday party this Sunday, where they’ll have art giveaways, door prizes and a tattoo gift certificate drawing, which you can enter by bringing a non-perishable food item. I know, you’ll miss “Home Alone 2,” but it’ll be on again. —Jane Mattingly

Imagine this: Lucy is holding the football for Charlie to kick. As always, she takes it away just as he charges toward it. He flies through the air and lands hard on the ground, disgruntled. He gets up, grabs a Louisville Slugger, and whacks her into the next comic strip. Who says losers never win? OK, OK, only kidding, kiddies. The Louisville Slugger Museum is paying homage to the Peanuts gang with the exhibit “Merry Christmas, Charlie Brown,” which features memorabilia from the popular cartoon and pays respect to the 1965 television special, “A Charlie Brown Christmas,” with a rare, behind-the-scenes look at artifacts used in the production. The exhibit was developed by the Charles M. Schulz Museum in Santa Rosa, Calif. —Sara Havens

“Art should be fun! I enjoy looking at art, I enjoy learning about art, but most of all, I enjoy making art,” says ceramicist Stephen Hammer. “I do not intend for my work to be political, religious or ridiculously conceptual. To me, this is real art — making art for the sake of art.”

Hammer’s exuberance is contagious. Another reason I like him, aside from the fact that he used to work at the sorely missed Studio2000, is his creative process. He likes to write about his goals for finished work. Most artists do only sketches, not writing. For this series of ceramic wall pieces, he said he began writing about changes in his life; he later transformed those thoughts into the visual. A reception is Sunday, Dec. 19, from 2-4 p.m. —Jo Anne Triplett