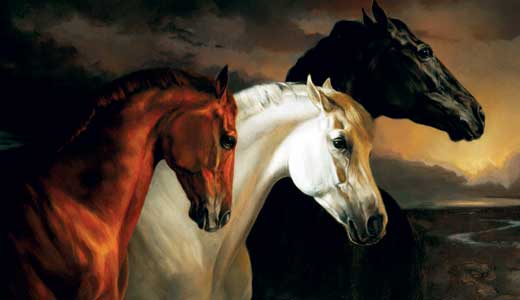 ‘Girl Who Kicked the Hornet’s Nest’

Curious about the Stieg Larsson hubbub but not big on the whole reading thing? The last film adaptation of Larsson’s best selling “The Girl Who …” trilogy opens nationwide this week. If you’re already one of the books’ avid readers (40,000 new members join the posthumous Larsson’s fansite each week), you probably already know “The Girl Who Kicked the Hornet’s Nest” begins its local run at Village 8 today. Noomi Rapace returns as Lisbeth Salander, a heroine who has captured readers’ imaginations perhaps as much as any other literary character this century. There have been comparisons to Nancy Drew, Lara Croft and Wonder Woman, but — as Larsson revealed in a rare interview before his pre-fame death in 2004 — Lisbeth is actually a grown-up version of Sweden’s best-known children’s book hero, Pippi Longstocking. —J. Christian Walsh

I believe texting is making us stupid. As a species, our intelligence is going in reverse. Apostrophes are no longer necessary. Commas, semicolons, even periods have been thrown out with the bathwater. And spelling … well, who needs it? We have spell-check to catch our mistakes. I think it’s bologna. And that’s spelled b-o-l-o-g-n-a. Perhaps in an effort to praise and encourage smartness, Zanzabar is hosting a spelling bee tonight. It’s going to be structured just like the ones in elementary school, except drinking will be encouraged. That’s an after-school special I can get behind. If you’re not confident in your abilities to s-p-e-l-l, you can enter with a partner. The winner gets a $50 gift certificate and an awesome trophy that resembles a Scrabble tile. Signups start at 7:30 p.m. W-o-r-d. —Sara Havens

Seldom-seen roots outfit The Betweeners are looking to resurface with a new album soon. Bandleader Stephen Couch reports that the group’s follow-up to its 2004 album Matador Karma has been “15 minutes away from being done for the last two years.” He’s finishing up nursing school but anticipates a May release, although “if someone handed me a check tomorrow, it could be done and getting duplicated in two weeks,” he says. The as-yet-untitled work was recorded in part at the home of Steve Cooley (The Galoots, Hog Operation); Couch describes the material as a departure from a previously overt bluegrass influence. Cowpunk confessor Shadwick Wilde and road heathens Dallas Alice help deck the hall. —Mat Herron

Tim Northern does what Tim Northern wants. And this holiday weekend, he wants to headline not one, but two comedy clubs — The Improv (with Sarah Hyland and Jamie Utley), and Comedy Caravan’s “Best of the Bluegrass III” show. And that’s exactly what he plans on doing. Northern is a Louisville transplant by way of Nashville, and he’s been one of the most well-respected comedians on the scene since he arrived here. His brand of comedy has been compared with people as diverse as Dave Chappelle and Mitch Hedberg, but ultimately, he’s all Tim Northern. While he’s in town, he will be promoting his upcoming CD, Tim Northern’s Second Album. For a full interview with Northern, go to www.leoweekly.com. —Brent Owen

While earning a degree in classical voice from George Washington University, swing dancing overtook Jayna Morgan so deeply that she ended up running Jitterbugs Swing Society, which offered students lessons in the Lindy Hop, a dance from the 1920s and 30s named after Charles Lindbergh. Morgan’s affinity for the genre transcends affectation. During the late ’90s, when a zoot suit riot was kick-started by “Swingers” and the Squirrel Nut Zippers, she began performing regularly and singing with jazz bands in her hometown of New Orleans. Morgan co-founded NOLA Swing, an organization dedicated to promoting the craft, and learned from the Crescent City’s most venerated jazz musicians. She also formed The Frenchman Street Flappers, a professional Charleston dance group. Her appearance Tuesday with her Sazerac Sunrise Jazz Band is evidence of Third Street Dive’s expanding palette. —Mat Herron

The Kentucky Museum of Art and Craft’s exhibition of vintage and modern toys may be the perfect place to take the kids. When’s the last time you got the chance to say, “When I was your age …”? The more than 100 toys in the show include such oldies-but-goodies as pedal cars, tin toys and board games. Kentucky poet Frank X. Walker has loaned his personal collection of action figures and posters featuring African-American entertainers and superheroes like Blade, Spawn and Jimi Hendrix. Louisville’s Toonerville Trolley neighborhood (part of Old Louisville) inspired a comic and board game: “Toonerville Folks” was a comic panel by Louisville native Fountain Fox Jr., which ran in more than 300 newspapers from 1913-55. The comic, in turn, inspired the 1920s “Toonerville Trolley” Milton Bradley board game. —Jo Anne Triplett

Gallery at the Brown

“My new series of equine paintings and studies is inspired by the idea of the mythical horse,” explains artist and horsewoman Jaime Corum. “I grew up steeped in the great horse mythology of The Black Stallion, Black Beauty, Flame, Thunderbolt, Phar Lap and King of the Wind. Then and now, horses hold such symbolic power for me. It seems only a small step to give them the names and attributes of mythological characters. With unabashed romanticism, (this series) portrays the horse as ideal, symbol, mystery and saint.”

The nearly 20 new works were created in paint, shadowbox collage and mixed media. The result is a magical portrayal of the animal Kentucky loves. —Jo Anne Triplett

As the holiday season nears its end, it’s hard not to see red. Not only are we exasperated from sitting in traffic on ice-covered roads, still without a gift for Uncle Roy, our eyes are bloodshot with images of creepy mall Santas, glassy-eyed Target employees and those damn red noses people have been putting on the grills of their cars (Rudolph the Red-Nosed Range Rover? Whatever). But seasonal cynicism aside, red can be pretty and festive, and can remind us of feeling warm and cozy. Gallery Janjobe’s current exhibit features artists’ interpretation of the red theme, along with the annual handmade ornaments show. “Red invokes passion and warmth, and it’s connected to the holidays as well,” says gallery co-owner Jana John. “We wanted to generate a little heat now that it’s getting colder.” —Jane Mattingly