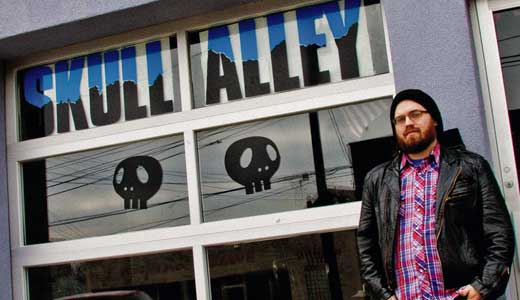 If you chose not to participate in the mass commercial ritual of purging discretionary income known as Christmas, consider this alternative: The Archdiocese of Louisville is hosting its 29th annual Kwanzaa celebration today. The seven-day, non-religious festival called Kwanzaa, from a Swahili phrase meaning “first fruits of the harvest,” was inaugurated in 1966 primarily as a means for African-Americans to participate in a holiday free from the empty consumerism symbolized by the Coca-Cola Santa Claus. This year’s theme of Ujamaa, or “cooperative economics,” couldn’t come at a better time. The community-wide event will feature music, food and a clothes drive. —Jonathan Meador

You’ll probably recognize Christian Finnegan from his sarcastic commentary on VH1’s “Best Week Ever” series — but this holiday weekend, you can get to know him for his stand-up comedy. Finnegan has also appeared on “Chappelle’s Show,” “Tough Crowd with Colin Quinn” and hosted TV Land’s “Game Time.” After the success of his debut album, 2006’s Two for Flinching, Finnegan released the DVD/CD Au Contraire last year. When he comes to The Improv, he’ll be working with all new material for an upcoming special. And if you’re looking to laugh-in the New Year with a great post-holiday deal, you can catch his New Year’s Eve performance, whose ticket price will include admission and a three-course meal — including tip. —Brent Owen

Skull Alley’s closure doesn’t bode well for the future of Louisville’s all-ages scene, but the future can wait until after New Year’s Day. On Friday, owner-operator Jamie Prott powers up the PA for the last time in what amounts to a time capsule for the combination music venue and print shop. Lemuria played Skull Alley’s first show, Reading Group is a relatively new outfit featuring Prott himself, and a brand new project called Black God, led by Robert Pennington (Endpoint, Minnow) and Ryan Patterson (Coliseum, Black Cross), is about as old-school punk as it comes. Young Lions and The Foxery open the show. Tickets are on sale at Skull Alley and ear X-tacy. —Mat Herron

Chances are today is going to unfold one of two ways: 1) Eager to embrace your New Year’s resolutions, you awake early, go for a brisk jog, meditate, then refuel with a sensible breakfast, or 2) You awake with a pounding head, stumble to the bathroom in search of aspirin, struggle to piece together what transpired after you finished off that bottle of Andre, then laugh about it over a greasy breakfast with friends.

Assuming the former scenario is more your style, you have everything under control and don’t need our advice. If you fall into the latter category, however, here are some suggestions to help lift you out of that champagne-induced fog: Barbara Lee’s Kitchen, a brief stroll through Cherokee Park, then back home to hold down your couch for the rest of the day. —Sarah Kelley

‘The Man in Black’

Johnny Cash fans, take note: Robert Shaw and the Lonely Street Band will bring “The Man in Black,” a tribute to Cash’s music, to Clarksville’s Derby Dinner Playhouse this week. Complete with costumes and a top-notch production, this show will make you feel like you’re at Folsom Prison — minus the nasty yellow water. Shaw, a touring artist who is fresh off a stint with the Chicago cast of Broadway’s hit musical “Million Dollar Quartet,” will draw from all facets of Cash’s 50-year career, from classics like “Folsom Prison Blues” and “I Walk the Line” to later hits like “A Boy Named Sue” and “Ghost Riders in the Sky.” —Kevin Gibson

Stevie Ray’s loves the gays. As proof, they’re hosting an LGBT night of live music next Wednesday featuring “Punk Rock” Pam Newman (formerly of The Revenge of Ricky Williams), The Sirens, Jenn Stout Band and Chris Holcombe of Nashville. These artists are so wealthy in talent, they needed a hack emcee to balance out the bill, so they tapped me, seeing as I have no musical talent other than blowing into empty beer bottles. Depending on how many free drinks they give me, the Bar Belle will most likely show up and tell some lewd jokes about snowstorms and eight inches. Come out and play! We won’t bite. —Sara Havens

Longtime Wu-Tang fans have been abused, their hopes repeatedly dashed by sub-par albums and poor or canceled shows. Yet they still come back. They drive hours for but a glimpse, only to read a sign on the venue’s door reading, “Method Man Canceled. Masta Killa to Replace. No Refunds.” And still, fans return. As a unit, the Wu has never really proven itself live. Each has his own hype man, some newly signed underling or hanger-on who lurks onstage amidst a garbled mess of 22 grown men shouting at the same time. These caveats aside, early reviews of The Rebirth Tour have been raves, and YouTube evidence backs this up. Not every member has been present — RZA is filming a movie in Hong Kong — but hype men are kept to a minimum, and the guys act like they want to be there. A triumph indeed. Dolla Green opens. —Damien McPherson

With New Year’s Eve out of the way, will you be ready to nurse your hangover with some laughs? Project Improv will be performing their show, indecisively titled either “Hair of the Dog” or “Dude, Where’s My Keys?” at Comedy Caravan for one night only. The show will be a series of vamps that focus on the darker side of a drunken night … the next morning. And to make sure you really get in on the action, the troupe will turn to the audience for suggestions or direction — and if they use your idea, then you’ll be rewarded with a free drink from the bar. And it’s two-for-one admission night, so if you tell the doorman “two for one,” then your friend, girlfriend, boyfriend, guy you know from work or favorite stalker will be able to enjoy the show with you for free. —Brent Owen

The new gallery at the Louisville Visual Artists Collective is featuring an exhibit illustrating the theme “more is more.” Gallery founder and director Keith Linton explains that the 14 artists, including Jeremy Dixon and Eddie Santiago, “investigate multiple frames and parts, multiple aspects of the same subject, and multiple points of view.” The building near Zorn Avenue, with past lives as a plantation house and chemical factory, now has its walls and floor covered in paintings, photography and sculpture. “Many of the artists in this exhibition have expanded the idea of multiplicity by creating series, sequences and images that comprise numerous parts,” he says. “They explore repetition, pairing and variations on a theme as artistic strategies.” The closing reception is Friday, Jan. 7. —Jo Anne Triplett

Artist Jane Morgan believes so strongly in the virtues of painting outdoors, known in the visual art world as “plein-air,” that she started the Plein Air Painters of Kentucky in 1998. As a gallery owner, she gets to do double duty by exhibiting and representing a portion of that group. Her current exhibition features her own work along with that of Beverly Bruntz, Katie Burke, Penny Diamond, Suzanne Dougherty, Gwenn Knight, Rita Neblett, Jane Mitchell, Robert Purol and Valtcho Tonov.

“This year, the group painted numerous times over the past spring, summer and fall, depicting Woodford’s (Reserve Distillery) National Historic Landmark and its surroundings,” Morgan says. “I think (these artists) are darn good.” —Jo Anne Triplett