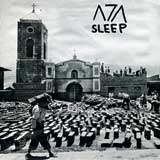 It would be a surprise if he didn’t make collages as a kid. Another Seven Astronauts, the solo project of Lucky Pineapple and Invaders drummer J.C. Denison, is an adventurous journey stretching the limits of the phrase “sound collage.” Sleep follows his first homespun release, Lava, Water, Sky, Computer, and this time around, you can hear him delve deeper into abstraction. Though loop-friendly, Denison doesn’t fall into the trap of letting the sampling do all the work, and his instrument choice is designed to evoke all manner of emotions. A varied palette, his styles cut across many genres: Caribbean, dance, electronica (“How ’bout It Now,” “Magnifly”), to melodies reminiscent of traditional Chinese and Japanese folk music, courtesy of the steel drum work in “A Love of Drowning”. A student of rhythm, Denison relies on drums as mood instruments (“Chasing Apparitions”) as well as agents of propulsion.