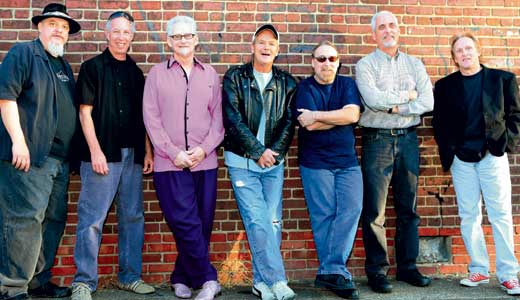 Not even death, it seems, can keep the Stray Cat Blues Band from the stage. The group was formed in the late 1970s by Jimmy Brown, Greg Martin, Ricky Mason, Dickie Durlauf, Bruce Lively and Joey LaMont Gillispie, all of whom went on to other notable projects (100 Proof Blues, Bodeco, The Kentucky Headhunters, Hellfish and more). Durlauf passed away in 1987.

A couple of years ago, Steve Ferguson asked Martin to fill in for him at Big Rock Jazz Fest, at which point Martin tried several times to reunite Stray Cat. Mason’s death last New Year’s Day finally served as the catalyst. The surviving members recruited Bill Dean on piano and Bob Ramsey on organ for a show Friday at Zeppelin Café (1036 E. Burnett Ave., 365-3551).

ear X-travaganza
The Watson Twins, Ben Sollee, Scott Carney of Wax Fang, Cabin, and My Morning Jacket’s Jim James and Patrick Hallahan are scheduled to perform ear X-travaganza Sunday, Dec. 26, at Headliners Music Hall (1386 Lexington Road, 584-8088). The concert is billed as a celebration of ear X-tacy, the independently owned record store in Douglass Loop that celebrated 25 years in August, but has struggled financially for more than a year. Tickets are $20 and are on sale now at ear X-tacy and online at www.etix.com. Showtime is 7 p.m.