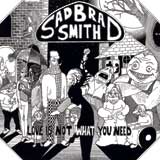 Bradley Grant Smith scored a coup when his song “Help Yourself” appeared in the major motion picture “Up in the Air,” and this re-release of the Chicago songwriter’s debut is his way of saying there’s more where that came from. Smith doesn’t remain in the doldrums as much as his name or genre (check “sad” for both) suggests. “Get Together” hops along much the same way as Ricky Nelson’s “Polynesian,” and the keys on “Home Sweet Home” give off attitude. The ailment crippling Smith most is his lack of subtlety. He relies too much on telling people he’s sad, or depressed, or melancholy, or whatever, and not enough time working on an eloquent way to describe those feelings. Instead, his voice on “We Are Free” becomes a numb, detached hangnail on an otherwise healthy appendage. Prescription: couple of Dylan albums, maybe some Neil Young. Absorb thoroughly, then pick up the pen.