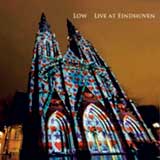 This is Low’s way of torturing us until its new album, C’mon, arrives early next year. The free EP, which is being offered on the band’s website, contains live versions of four songs: “Monkey” and “Silver Rider,” from Low’s 2005 album, The Great Destroyer; and “July” and “Laser Beam,” from the 2001 masterpiece Things We Lost in the Fire. Recorded in January of last year at St. Catherina Church in Eindhoven, Netherlands, the members are backed by a full choir and organ, so longtime fans won’t have to imagine too deeply how ghostly and perfect this sounds. “Silver Rider” and “July” benefit from the choral support, as if the songs themselves were waiting to absorb more voices. The recording is rich in detail and registers the ambience that comes from performing in a neo-Gothic church.