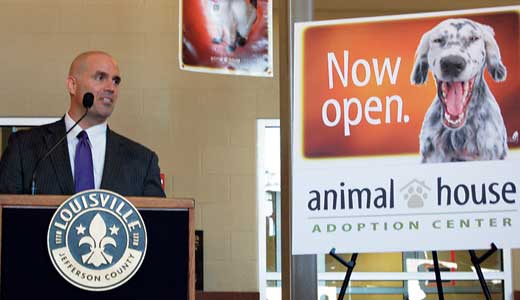 Located at 3516 Newburg Road, the state-of-the-art facility — dubbed “Animal House” by employees — concentrates LMAS’ adoption services under one roof in an attempt to take the burden off of their original, cramped and depressingly inadequate 50-year-old Manslick Road shelter, and adds 50 new kennels and a “Pussycat Lounge” big enough to house 50 cats.

Last Friday, some 100 people gathered in the building’s lobby for an official ribbon-cutting ceremony, where Christmas-themed animal treats were displayed alongside human ones, and television news crews awaited the arrival of Mayor Jerry Abramson.

“With the new facility, the focus on adoptions will in fact be the focus here,” said Wayne Zelinsky, interim director of LMAS, who acknowledged that six of the agency’s seven adoption counselors would be deployed at the Newburg site. Although adoptions will continue at the Manslick shelter with only one adoption counselor, Zelinsky does not think that lopsided figure will place any extra burden on staff.

Metro Councilman Kelly Downard, R-16, a longtime LMAS watchdog, was impressed by what he saw. “I think it’s great,” he said. “It’ll be a great success, but I still want to see how it interfaces with the Kentucky Humane Society and other volunteer rescue groups.”

Yet as much as Animal House symbolizes a step forward for the beleaguered city agency, some employees and sources familiar with the shelter contend that despite the much-publicized (and much-needed) unveiling of a new adoption center, working conditions at LMAS have not improved since the departure of former full-time director Dr. Gilles Meloche, and that a serious housecleaning is needed before any real positive change can ever take place.

“Honestly, I’m not sure if it ever got better (once Zelinsky took over),” said a current high-level LMAS employee who spoke with LEO Weekly on the condition of anonymity. “There are a lot of people who consider it worse now than when Meloche was there.”

On Jan. 1, 2010, Zelinsky succeeded Meloche, who announced his resignation in October 2009, after media reports uncovered a wide range of abuses that occurred during his tenure, including the illegal euthanasia of animals without anesthesia, inhumane kennel conditions, alleged sexual harassment and intimidation of employees, illegal seizures of pets, the sale of animals and animal pain killers for profit, and improper sexual relationships between city employees and workers from Dismas Charities, a halfway house for criminal offenders.

All the while, Mayor Abramson maintained that Meloche was a “change agent,” commending him for his performance.

“As far as directly comparing Wayne and Meloche, you know, at least Dr. Meloche would get up and walk through the kennels, and he had somewhat of an idea of what went on day-to-day,” the source said. “Wayne’s never in the kennels. Part of it is, I think, for the last few months now, he’s been pretty sure that he’s going to lose his job. So he’s been even more apathetic, and just doesn’t even give a shit.”

As far as Zelinsky’s fate at LMAS goes, Mayor-elect Greg Fischer has decided to keep him in place — at least for now.

“We’ll retain him for the interim,” said Chris Poynter, a spokesman for Fischer. “Mr. Zelinsky is eligible to become part of that (national) search if he wishes to become full-time director.”

But Zelinsky has already communicated that desire: He was one of 111 at-will Metro employees who submitted résumés to Fischer in order to reapply for their positions within Metro government. In his cover letter, Zelinsky asked the mayor-elect “for the opportunity to continue to serve the people and animals of Louisville as a member of your cabinet.”

Although Zelinsky could not be reached for comment regarding his future at LMAS, he previously told LEO Weekly that the last time he spoke with Fischer was before the May primary.

The mayor-elect’s decision to keep Zelinsky on board, even on an interim basis, contradicts a statement he made in mid-October. In an interview conducted on the campaign trail, Fischer was asked if Zelinsky would be retained, to which the then-candidate responded, “No. We plan on doing a national search for that job.”

Sources close to LMAS and Metro Council confirm that a selection committee already is being formed to find a full-time director for the city’s animal control agency, although a spokeswoman for Mayor Abramson, Lindsay English, said selecting a new director would be a decision reserved for the incoming Fischer administration.

In the meantime, LMAS’ rank and file must continue to do the best they can with the status quo.

“The culture there, as far as inter-employee relations (go), the people that Wayne has put into management positions have hardly any common sense or flexibility to manage people,” the LMAS source continued. “The people who call out to him that he has incompetent people in management are just harassed verbally by him and told to shut up… It’s just awful, really.”

Barbara Haines, a member of the Louisville Kennel Club, says the nonprofit animal welfare group still receives calls from Metro area pet owners about abuses by LMAS animal control officers (ACO), mainly regarding the illegal seizure of pets. The issue has been an ongoing problem since the implementation of a problematic “dangerous dog” ordinance passed by Metro Council in 2006, whose enforcement has adversely affected low-income pet owners in particular.

“I’ve had so many calls from people in the last few months,” Haines said. “It’s just blowing us away that it’s still happening.”

Haines added that Zelinsky has turned into a “Meloche Jr.” and corroborates the anonymous source’s claims that a culture of intimidation and lax control remains in place at LMAS.

The source maintains that the only way to improve the shelter is to start from scratch: She advocates firing everyone — herself included — and forcing everyone to reapply for jobs. In the meantime, she said, the shelters should be staffed at a bare minimum to keep things running.

“Those of us who do work really hard and do want to see positive change are so jaded from the past and by everything that has happened there,” she said. “Some of us are convinced that, as hard as we work, that change will never happen, that it’ll never get any better.

“Whoever does (get Zelinsky’s job) will have to be prepared to deal with those employees,” she concluded. “They are very manipulative people who will do their best to undermine whatever happens there.”