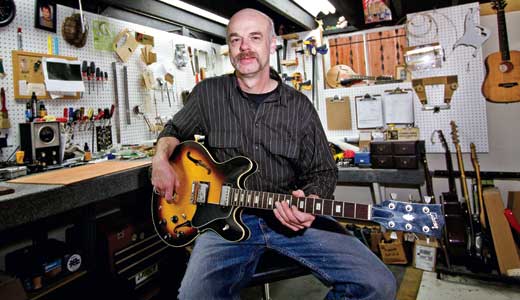 Bill Barney doesn’t wear a stethoscope, but to guitar players, he’s a doctor like any other.

From the basement of his home in Crescent Hill, he restores and rehabilitates guitars, basses, mandolins — “pretty much anything with frets” — with surgical attention. His carpeted worktable stretches the length of one wall festooned with various tools and filing blades, an electronic string winder, a red C clamp and a test amplifier. A belt sander and circular saw sit off to one corner, while the doors to a climate-controlled vault are in another. “This is the cleanest it’s ever looked,” he says of the shop.

Barney learned his trade at Robeto-Venn Luthiery School in Phoenix, where he graduated as a luthier, someone who makes or repairs stringed instruments. The word is derived from the French term “luth,” meaning lute, the tool of choice for traditional musicians during the Renaissance and Baroque periods.

Historically, luthiers have played an important role in the evolution of guitars, influencing popular designs you see today by brands like Fender, Gibson and Gretsch, which was founded by luthier and German immigrant Friedrich Gretsch in Brooklyn in 1883.

Robeto-Venn, now in operation for 40 years, teaches a five-month course in guitar construction and repair. Once Barney graduated from there, he worked at Bob’s Guitar Service, now called Third Coast Music, in Chicago, repairing guitars for all the area’s Guitar Centers.

In 1996, he moved back to Louisville to work for Guitar Emporium and started his own repair business on the side in 2002, gradually turning into an independent contractor. He is now a licensed repairman for Martin and Taylor, whose acoustic guitars are played by Tom Petty, Beck and Merle Haggard. Barney’s clients range from Billy Gibbons of ZZ Top, Sheryl Crow, Will Oldham, Dave Pajo of Slint and The Yeah Yeah Yeahs, and My Morning Jacket’s Jim James.

Barney doesn’t publicize his rates; he prefers to schedule appointments with clients to look at the instrument (his website: www.barneysguitarservice.com). He stays busy, thanks to a steady word of mouth and Louisville’s sizeable population of guitarists. “One out of every 10 people here play guitar or know somebody who does,” he says.

“When he was working at the shop, we handed him several basket cases. I’m not the basket-case guy,” says Steve Cooley, the banjo player and singer for Hog Operation who’s had Barney work on his banjos and acoustic guitars. “I’ve seen him do some incredible stuff, turning around (instruments) that I didn’t think were going to turn around structurally.”

Wax Fang singer and guitarist Scott Carney has gone to Barney often this year, sometimes on short notice. “I’ll tell him, ‘I need this (done) as soon as possible,’ in the middle of recording, which is sort of an annoying request, but he always gets them turned around,” Carney says. “He knows what he’s doing.”