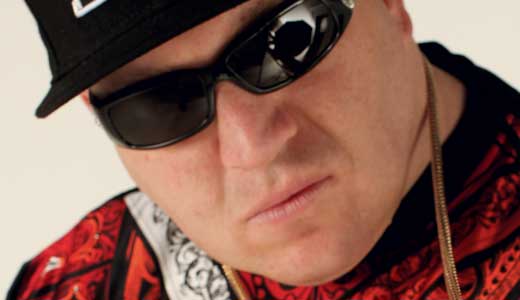 The rapper spent the last year and a day at McCreary Federal Prison in Pine Knot, Ky., where he served time on drug charges. “The crazy thing is, it was from years ago,” he says, “and it was something that came back and got me.”

Born Tim Kalbfleisch in Fern Creek, Bukshot has sold an estimated 150,000 CDs through his label, Mobstyle Music. The Problem, his seventh album, was recorded at Hold 1 Studios on West Broadway and features guest appearances from Code Red and A. Lee.

Prison bars weren’t all that greeted him inside. “There was actually a guard there that had a few of my albums. A lot of people — Tennessee, Indiana, Florida — knew who I was.”

Known for his size as much as his mic skills, Bukshot has dropped down to 119 pounds thanks to four-hour workouts with concrete blocks (federal prisons don’t allow the presence of regular weights). K.C. Hustle, the owner of Interstate Records who’s co-releasing The Problem, mailed Bukshot lyric sheets so he could rehearse the rhymes during daily, 6-mile jogs.

As of Dec. 2, Bukshot will be on probation for two years. The feds know he’s a rapper, and touring logistics will need to be negotiated with his probation officer.

In rap, prison time practically qualifies as a career move, but for Bukshot, it’s not a point of pride. “If I could take this whole year back and take this whole prison thing away, from the time it’s kept me from my kids, I would literally say the hell with Bukshot and the whole career,” he says. “It might give me street cred or it might boost album sales. To me, I don’t think it’s cool at all.”

He says he hasn’t explained in detail to his two sons, ages 10 and 12, why he’s been away. “I told my kids, ‘What happened is a very long story, and right now you wouldn’t understand it, but when you all get a little bit older, and you want to ask me, I’ll let you know.’”

Music Cast
Engineer Trip Barriger discusses the construction of his new studio and Live at Skull Alley 7-inch series. Listen to our past podcasts at our music blog, Bluegrass Catastrophe, at bluecat.leoweekly.com.