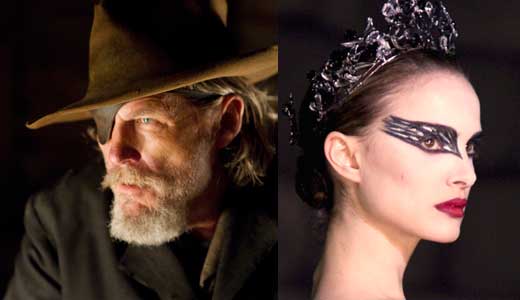 As was the case in 2009, “Don’t open ’til Christmas” could be tagged to the year’s most anticipated films. Capturing year-end Oscar momentum and a large holiday box office is becoming as traditional as nonstop seasonal radio. Last Christmas, with “Avatar” leading the way, the industry unwrapped a frosty $270 million in ticket sales — the largest weekend gross ever. This Dec. 25 will again see plenty of family-friendly releases, as well as the latest from several indie legends.

Darren Aronofsky, the Coen Brothers, Sofia Coppola, Mike Leigh and David O. Russell all have promising year-end premieres. So, if you’re able to avoid “Yogi Bear” this weekend, here are a few goodies to add to the wish list.

Horror meets high art in “Black Swan,” a rare and stunning piece of work that is as beautiful as it is creepy. In it, the chaste Nina Sayers (Natalie Portman) and her party-girl frenemy, Lily (Mila Kunis), compete as members of an elite New York City ballet company. Vincent Cassel plays Thomas — the demanding director with a busy casting couch — who sets out to anoint one of them as his new prima ballerina.

Watching the company assemble their version of “Swan Lake” is artful and compelling, but what makes this wild and taut thriller go is the sense of peril that ratchets up with each of Nina’s obsessive pirouettes. As her inner Black Swan struggles to take flight, the plot around her grows increasingly fraught. The threats against her mount with chilling effect, though we are never certain just who is out to get her. What are the true motives of the mind-fucking horn dog Thomas? Or the pill-popping, panties-in-purse Lily? Or even Nina’s doting mother, Erica, played by a wonderfully tweaked Barbara Hershey, herself a faded ballerina who compulsively paints portraits of her daughter?

Like a magician’s patter during a sleight-of-hand, director Darren Aronofsky (“The Wrestler”) employs misdirection to keep viewers off balance. The overworked and undernourished Nina begins to see what isn’t there — and so do we. With the aid of a brilliant sound design, a mere nail clipper wielded by Nina’s mother (and used only for its intended purpose) becomes as menacing as a power tool raised above the head of a psychopath.

Losing track of what’s real could have proved frustrating, but in the hands of Aronofsky, the trap doors in “Black Swan” induce goose flesh, each time luring us a little further into Nina’s frenzied descent.

The Coen Brothers’ new Western also draws from classic source material, but unlike “Black Swan,” their PG-13 remake of “True Grit” can accommodate mature youngsters as well as their grandparents. Just don’t let Pappy talk smack about Jeff Bridges being unworthy of the Duke’s eye patch! Bridges looks like he’s been stewing in that crusty Union Suit for a decade while preparing for this role. He sinks easily into Rooster Cogburn, a loaded U.S. Deputy Marshall originally played by John Wayne. In this version, Bridges confiscates the role and makes it his own.

Despite flashes of violence, this is the straightest — and perhaps loveliest — thing Joel and Ethan have produced in recent memory. Part of this is due to the deference paid to the still witty, still fresh language of Charles Portis’ 1968 novel. It’s also thanks to the arrival of Hailee Steinfeld, who plays Mattie Ross, a 14-year-old who, along with Cogburn, tracks her father’s killer into Choctaw territory. To call Steinfeld’s performance “plucky” would be putting it mildly. The infinitely likeable newcomer more than holds her own against the film’s three leading men, who have a combined 106 years of on-screen acting experience between them.

This isn’t to say that Josh Brolin, as the detestable killer, and Matt Damon, as a loquacious Texas Ranger with a severed tongue, don’t deliver. They do.

In “The Fighter,” Mark Wahlberg is surprisingly tender as “Irish” Micky Ward, a (real-life) boxer whose best gift seems to be a talent for absorbing ass-whoopings. The actor’s sequences in the ring are convincing, and he’s particularly effective when opposite co-star Amy Adams. But the film’s real punch comes from Micky’s corner. His incredible supporting cast features Melissa Leo (“Frozen River”) and Christian Bale, both of whom are nearly unrecognizable as the unruly stewards of Ward’s career.

“Supporting” feels inadequate to describe what Leo and Bale do for Wahlberg’s lead role — if ever a pair of actors hoisted a performance onto their shoulders, Leo and Bale do so for Wahlberg. As Ward’s mother and manager, Leo behaves like something casting scraped off the carpet at Foxwoods Casino. As Ward’s drug-addicted half-brother and trainer, Bale too looks and sounds authentically Lowell — the hardscrabble Massachusetts town that becomes a character itself.

Bale’s New Englander is strong, but his crack-head is even better. His sunken face and capped teeth provide the film’s first image. It’s a shocking thing to see, despite the fact that we’ve watched this actor drop weight in the past. As Dicky Ecklund, it looks as though Bale went and made himself sick.

“I Love You, Phillip Morris” has nothing to do with smoking and everything to do with a flaming prison romance. The really weird thing is that it stars Jim Carrey and Ewan McGregor as hot and heavy cellmates. Also coming to the Baxter, this may be 2010’s most awkward film.

In “Somewhere,” Sofia Coppola follows a privileged character moping around a luxurious hotel. (No, not Scarlett Johansson at the Park Hyatt Tokyo.) This go ’round, it’s Stephen Dorff at the Chateau Marmont. Coppola’s work should irritate and bore more than it does, but this master of mood captures tone and tempo about as well as any American director. Her ear for tunes and eye for style makes just about anything she does more than watchable.