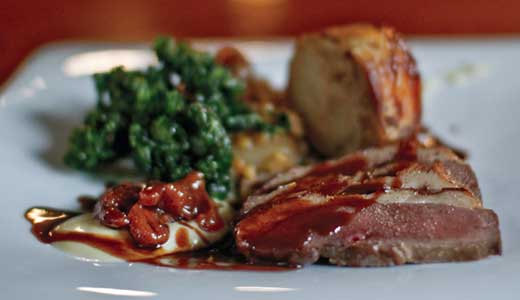 I’ve always been a big fan of “Iron Chef,” both the Japanese original and the American imitation it spawned.

Some find its campy concept over the top, with the wacky über-rich Chairman in his Kitchen Stadium yelling “Allez Cuisine!” in bad French, but just about every foodie I know can see past the yuks to the serious competitive restaurant-chef cookery.

After an hour of an intense, timed cooking competition, in which the competitors make the best use of the week’s secret ingredient, comes the best part of the show: when the chefs bring their finished dishes forward to a panel of judges, a group that on the original show invariably included a food critic plus such skilled experts as a movie starlet, perhaps a Japanese athlete, sometimes a member of the Japanese parliament.

How I wished I could have been up there at the table sampling all those amazing, creative dishes.

So when Chef Edward Lee of Louisville’s 610 Magnolia turned up on “Iron Chef America” last month, taking on Iron Chef Jose Garces in an offal battle featuring “tongue and cheek,” and Lee won, I realized I could get a similar effect right here at home by presenting myself for a dinner of Lee’s inspired cooking.

We invited our pal Lucinda to come along, got the first reservation we could, and arrived hungry. It was about time for another visit, anyway. It had been three years since my last review, and things change fast in the local food biz. Would Chef Lee’s cooking still reign supreme?

Well, yes. It was a spectacular dinner, with each of us choosing different items from the prix fixe menu so we could taste and share; service was right-on as always; and to apply the final touch, the extensive wine list remains one of the most well-chosen and interesting in town, avoiding the “usual suspects” in favor of some wines that appear to be exclusive to 610.

Better news still for the thrifty: While an evening at 610 is going to cost you, 610’s prix fixe dinner menu has been rejiggered to offer the option of a shorter bill of fare for a smaller tab.

You can now enjoy a three-course prix fixe for $50 or a four-course for $60, taking your pick of several selections each under appetizer, soup or salad, main course and dessert. Choose a bottle of wine from the list at a price point that fits your wallet, from $30 to $1,000 or more; order by the glass, or let 610’s wine experts make the picks for you, accompanying each course of your meal with wine pairings for $50.

Now, get out your calendar: 610 Magnolia is open only for dinner; reservations are available only on Thursdays, Fridays and Saturdays, and fill up fast; other nights are taken by private parties and special events.

The seasonal menu is defined as “New American farm-to-table cuisine,” which seems fair, although it certainly boasts a world of international flavors and offers an occasional glimpse of Lee’s Korean-American heritage in something like a dab of kimchee in an unexpected but delightful place. It gets an update every weekend, with some standards likely to remain through the season. A to-die-for truffle ravioli will remain as a special, for example, through the end of this month.

A trio of foodies who’d all love a crack at being “Iron Chef” judges, we pored over the menu for a long time before making our choices, reluctantly passing by such appealing options as rare ahi tuna with wasabi tobiko roe; butternut brown-butter soup with duck confit, dried figs and foie gras shavings; and a delicious looking red-meat option, seared rib eye with black barbecue beef cheek and more.

Sooner or later we had to choose, though, and with a modestly indulgent bottle of Louis Latour Puligny-Montrachet ($95), a toasty, chestnutty white that Lucinda loves, we worked our way through a trio of three-course dinners.

Sliced Blue Dog bread and herb butter and a complimentary trio of mini-amuse-bouche appetizers — artfully plated house-made duck prosciutto, an intense, savory meatball and a bite of tongue-in-cheek BLT — got us started on a high note.

The appetizer courses were all right-on, artfully plated (just as they are on “Iron Chef”) and showing the unexpected, creative combinations of flavors that seem to be Lee’s trademark.

Snow-white halibut and rosy-bronze Arctic char were formed into a roulade roll, poached and sliced into pretty rounds, served atop a truffle-scented celeriac cream that Mary declared one of the best things she had ever eaten, plated with sliced rounds of sunchoke (Jerusalem artichoke) and tiny black trumpet mushrooms.

Strips of deeply flavored, thin-sliced roast duck breast and roulade rounds of pheasant made an unexpected and delicious poultry pairing, plated over heirloom farro (an ancient European wheat grain) and glazed pearl onions, accented with a symphonic combination of sauces based on raisin must, foie gras mayo and — wait for it — dark, bitter chocolate. It made me visualize the “Iron Chef” starlet judge chirping, “It makes my mouth sing.”

We didn’t really have room for desserts, but hey, it’s part of the prix fixe. A serving of two oblong logs of coconut-vanilla flavored french toast, crisp on the outside, creamy within, was accompanied by a tart, not-too-sweet Meyer lemon compote, smooth macadamia pudding and a couple of cubes of silken chocolate mousse. Poached pear and toasted coconut sorbets and cups of strong, well-made espresso capped the meal.

In my opinion, 610 Magnolia consistently ranks among the city’s best restaurants. If a quiet, intimate evening is your goal, however, be wary. The dining room isn’t large, but undraped tables and a brick floor make hard edges that reflect and amplify the happy clamor of the diners all around.

Three $50 prix fixe three-course dinners plus a $95 bottle of wine, tax, a mandatory 18-percent tip on the total and an extra $25 on top of the tip brought the toll for dinner to $336.44, or about $110 per person. It’s a great value for an indulgent dinner at one of Louisville’s best restaurants. Pretend you’re an “Iron Chef” judge, and enjoy!