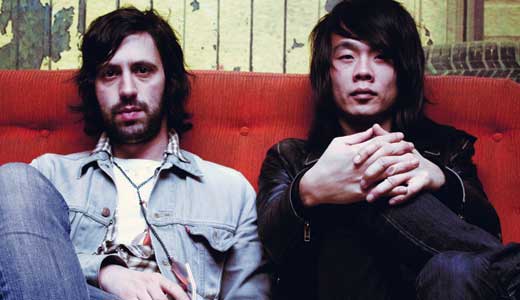 For more than a decade, VHS or Beta has been defined by its dance moves — those made not only by its fans on the club floor, but by the band itself, both in the studio and throughout its career. After the August 2007 release of Bring On The Comets, and subsequent trips to Jakarta, Shanghai and beyond, singer and guitarist Craig Pfunder decided to recharge his batteries and chart a new course for Louisville’s most visible dance export.

In the last year, the two relocated to New York, began a regular DJ night at a Williamsburg club called The Woods, and in the past few months, demoed 10 to 12 songs at a Brooklyn rehearsal space for a new album. “(The sessions) have been super collaborative between Mark and I,” says Pfunder, who wrote most of Comets. The new material leans toward 2004’s Night On Fire. “Interestingly enough, there’s less guitar,” Pfunder says. “It’s a record we’ve really been wanting to make for a long time — some disco, some electronic. This almost seems like an eponymous of the band, but not.”

In February, Pfunder, Palgy and Night On Fire producer Adam Dorn hole up at Plantain, the New York studio run by James Murphy of LCD Soundsystem. “He knows us really well, and he’s a good motivator,” Pfunder says of Dorn. They will record without guitarist Mike McGill, who lives in Los Angeles, and without original drummer Mark Guidry, who parted amicably with the group to remain in Louisville. Drummer Jim Orso (Jessica 6) will replace Guidry.

Unlike Comets, VHS or Beta will self-release the new album and will own their master recordings, “which we’re really excited about,” Pfunder says. Although there will be remixes of the new songs, that won’t be an emphasis. “We always seem to have remixes every record, so that’s not going to stop,” he says. “It depends on who we find to fit the song.”

One remixer is now in VHS or Beta’s orbit. Pfunder manages Jordan Atkins-Loria, a DJ from the Bay Area and Chicago who performs as Lucky Date. Pfunder found Loria’s recording tutorials on YouTube, asked him to remix a VHS or Beta song, and Loria turned it around quickly. “I found out through the course of working with him that no one was representing his better interests, and he wanted that,” Pfunder says. “I said, ‘We should work together, because I’ve been through a lot of things that you’re gonna go through.’ We’re a year deep in our relationship, and 2011 is going to be a big year for him.”

Don’t pass on The Pass
One of the most blogged dance-pop acts this year has been The Pass, whose debut full-length Burst, released in October on local imprint SonaBLAST Records, was named one of the year’s best records by British music blog The Recommender. They perform Friday at Headliners Music Hall (1386 Lexington Road, 584-8088), alongside WFPK DJs Matt Anthony and Woodrow on the Radio, as well as the Cirque Airotic aerial burlesque troupe. Advance tickets are $10, $12 at the door. Showtime is 8 p.m.