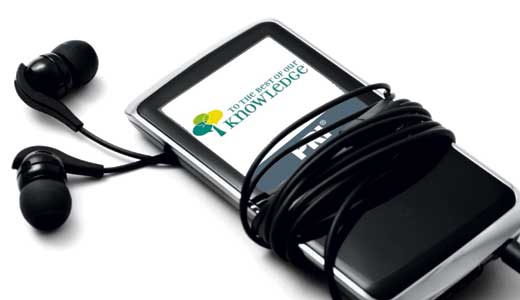 Remember a few decades ago, when it was proclaimed far and wide that radio was dead? OK, certain readers might not be old enough to remember decades back. But trust me, radio was said to be dead in the water. Make that the airwaves. “Video Killed the Radio Star,” after all.

But obsolescence is in the eye of the beholder, which has turned out to be a blind eye indeed, for all of the above are not only not dead — they’re alive and stickin’ it to the man, even when they are the man. Radio may well turn out to be the least dead of the undead media.

Hence the first in our new series, Podcasts You Might Be Missing, in which we will highlight global podcasts you can subscribe to (all free!) that go far beyond the expected fare we’re inundated with on NPR. Each ’cast is faster and easier to download than a song. All it requires is a quick visit to the host website and a right click on your mouse. You’re there!

We’ll start with one of the most listener-friendly programs available — Wisconsin Public Radio’s “To the Best of Our Knowledge” (www.wpr.org/book). TTBOOK, as it’s known in shorthand, is hosted by Jim Fleming, the guy you wish you’d had for that communications class you didn’t want to take in college. He’s learned, but he’s not a show-off. He’s smart but humble. He’s the Pete Seeger of public radio.

Twice each week, Fleming and his colleagues take on a theme and devote an hour to it, breaking it down into 15-minute interview segments. Yet it is nothing — and I mean, absolutely nothing — like “This American Life.” TTBOOK is not about gazing at one’s navel. Recent episodes have included “You Are What You Read” (in which one of the interviewees had intimate knowledge of the contents of Hitler’s private library) and “Lost in the Supermarket” (in which Chuck Klosterman deconstructed “Mad Men” in a way that no TV critic has ever come close to doing).

Even if you think a particular hour is going to be less than scintillating, it never is. An episode last summer devoted to the subject of fonts (that’s right — an hour on typeface) sailed by like a feather on the Ohio River.

Here is an example of another recent full hour of TTBOOK. Under the rubric of “Trickster,” Lewis Hyde explained the meaning of such infamous folklore figures as Loki and Monkey; Eileen Kane revisited her experience as a young, novice anthropologist studying the Paiute Indians of Nevada; Robert Marshall characterized Carlos Castaneda as a literary trickster who invented the “teachings” of Don Juan that made Castaneda famous in the ’60s; and Erica Rowell dissected the trickster mythos at the heart of two Coen Brothers films.

Never heard of any of these people? Imagine what other non-celebrity surprises await you.

If you’re too late for the podcasts, you’ve already missed but are dying to hear them, you can access them on your computer at the TTBOOK archives: radiotime.com/program/p_498/To_the_Best_of_our_Knowledge.aspx.