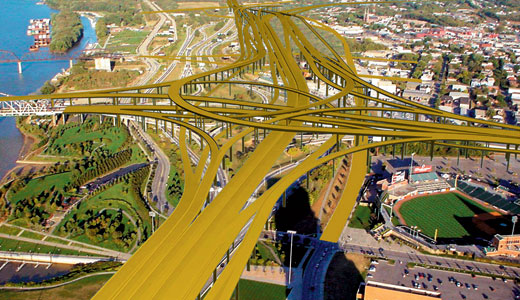 On a snowy, windswept Thursday morning, nearly 150 people cram inside the conference room of Kye’s reception hall in Jeffersonville, turning the latest meeting of the Louisville-Southern Indiana Bridges Authority into a standing room-only affair, with some attendees spilling out into the building’s chilly entrance hallway, chattering on cell phones or in small, head-shaking clusters.

The high turnout isn’t surprising. Since the elimination of public comments from regular authority meetings two months ago, interest (and opposition) to the $4.1 billion Ohio River Bridges Project — which seeks to build an East End bridge, a downtown bridge and an expansion of Spaghetti Junction — has only grown: Nearly two dozen people are wearing red stickers emblazoned with the phrase “No 2 Bridge Tolls,” reflecting membership in the recently formed anti-toll group of the same name.

“We are in the same fight,” says No 2 Bridge Tolls co-founder Paul Fetter, who also works at Clark County Auto Auction, one of many Southern Indiana businesses opposed to the authority’s proposed tolling of new and existing bridges. “We consider ourselves allies with (the Louisville-based Say No To Bridge Tolls), absolutely. At a time when most businesses and governments are scaling their spending back, this authority wants to charge us for a project they can’t even pay for.”

Amid growing opposition to tolls as a means to finance the project’s estimated $2.2 billion funding shortfall, the authority must contend with other significant roadblocks beyond their control. Last month, the U.S. Department of Transportation rejected their application for a $135 million federal grant. Not long after, the authority itself revealed it would fail to submit a finalized financing plan per their self-imposed Dec. 31 deadline.

Even worse, the authority’s financial consultant, Tamar Hankin of High Street Consulting, notes that more than two-thirds of surface transportation funding comes from increasingly cash-strapped state and local governments, and that the federal gas tax — which has long been the nation’s primary source of funding for surface transportation projects — hasn’t been raised or indexed for inflation since 1993.

“(That) paints a bleak picture,” says Kerry Stemler, authority co-chair and finance committee chairman. But he adds that the authority should take inspiration from states that didn’t wait for federal money, like Texas, Florida, Virginia and California — all of which incurred major debt.

In fact, all grim economic and political realities considered, authority member and President of Greater Louisville Inc. Joe Reagan stuns nearly everyone in the room when he calls for a target construction date of August 2012.

“It’s not a reckless decision,” Reagan says, adding that setting a target date will help move the process along more quickly. “We have to be definitive.”

A quiet wave of snickering washes over the attendant opposition, and Say No to Bridge Tolls co-founder Dan Borsch looks at me and rolls his eyes.

“They can’t be serious,” he whispers. “They can’t even meet their own financing deadlines, yet they’re already setting construction dates? It’s completely arbitrary.”

Arbitrary or not, the authority’s surprise announcement came on the heels of a new tolling study paid for by the nonprofit Bridges Coalition, a consortium of wealthy business and labor interests in favor of the Ohio River Bridges Project. At first glance, the study — conducted by AECOM Inc. — asserts tolls will cost local commuters $1 per one-way trip across new and existing bridges, including the Sherman-Minton (I-64), which would require rare federal approval in order to be tolled.

Furthermore, the study assumes that construction, operation and maintenance costs will remain at current 2010 levels, that the project’s costs and construction schedule remain unchanged and timely, and that interest and inflation rates remain stable — huge assumptions that the report itself says are subject to change and, thus, will result in higher-than-expected toll charges.

Integral to the report’s feasibility are traffic flow estimates generated by Wilbur Smith Associates (WSA), a traffic data analysis company that recently made headlines when Greenville, S.C.’s tolling authority filed for bankruptcy as a result of inaccurate traffic projections provided by (cue drum roll) Wilbur Smith Associates. As it turns out, WSA overestimated revenues on the Greenville Southern Connector toll road by nearly three times the actual amount, and the number of cars using the road fell short of reality by 55 percent.

“I’m not familiar with that (story),” says Steve Schultz, executive director of the Bridges Authority. “But I don’t think there’s anybody that understands the (public planning) model in the private sector as well as Wilbur Smith.”

“In terms of saving time, it made a lot of sense to use Wilbur Smith,” he continues. “The model is like a turntable, the traffic and revenue study sits on that like an LP. So what we’re doing is making a new (model) … and different studies can (go) on top of the model.”

And while Schultz says he hasn’t read the Bridges Coalition’s study in detail, he says the authority will be conducting research similar to their AECOM report — assumptions and all — in addition to exploring “innovative” and “alternative” means of funding the project in the absence of traditional pay-as-you-go public financing dollars.

He confirms that one of the funding options the authority is leaning toward is known as a “design-build” structure, whereby a private equity firm — say, JP Morgan Chase or Barclay Capital, two bailed-out banks whose reps attended this latest Bridges Authority meeting — lends a $2.2 billion-sized lump sum of capital to the Bridges Authority in exchange for a specified number of years’ worth of future toll revenues. The authority then divvies that cash among contractors who design and build the bridges.

The problem? Private equity firms can conduct their own tolling studies, complete with their own traffic assumptions, therefore allowing them to charge whatever they please on toll roads they own the lease to. For example, in 2005, Chicago leased its 7.8-mile Skyway toll road to an international consortium that paid $1.8 billion for a 99-year concession. Indiana pretty much did the same thing, too, with a 75-year deal that sold control of its 157-mile Indiana Toll Road for $3.8 billion.

“We need a solution,” concludes Fetter, “but this is not the proper solution. The key reason for our country’s economic collapse is runaway spending. How do you not equate that with what’s going on here? We’ll be borrowing money we don’t have from God knows who in order to build this thing, and we will be getting taxed to pay for it in the meantime.”

Indeed, in the meantime, the authority will reconvene on Dec. 9, and then again on Dec. 16 to vote on a financial plan that will formally adopt tolling.