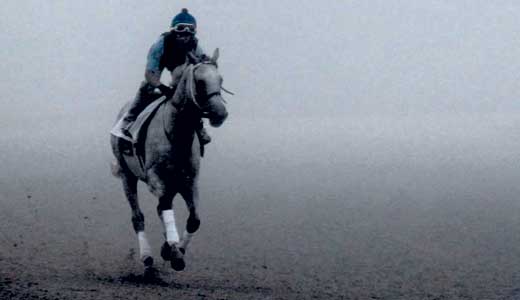 The National Book Award winner “Lord of Misrule,” set at a tiny racetrack in West Virginia, is a humdinger of a tale and an absolute page-turner — both forward and backward: To make your way forward in the story, you sometimes have to turn backward a page or two to figure out who is saying what to whom. And sometimes they’re just talking to themselves. For some reason, author Jaimy Gordon has lit upon the literary conceit of penning a story that is almost entirely dialogue — without using quotation marks.

But who cares? By the time Mr. Boll Weevil faces off with The Mahdi, going six furlongs in a maiden claiming race at Indian Mound Downs, the problem of the missing punctuation is forgotten, and we’re breezing along with people whose lives revolve around how their horses perform. The author spends almost no time explaining arcane racetrack technicalities and just lets her characters talk — like Medicine Ed, who explains to Maggie, the frizzy-haired girl who is in love with handsome Tommy Hansel, that a horse has a natural rhythm that might be slower than she wishes to go:

You follow custom, young woman. They is no I know, he know, like what you are talking about. Until you have put some years in this business, you watch the old grooms and do what they do.

That doesn’t sound very scientific to me, she say.

I tell you a secret, horse racing is not no science, with the drugs and the chemicals and that, but ma’fact it’s more like a religion. It’s a clouded thing. You can’t see through it. It come down to a person’s beliefs. One person believe this and one person believe that. It’s like the National Baptists bandage and the Southern Baptists use liniment, you see what I’m trying to say? Nobody exactly know.

But this isn’t just another girl-loves-horses feel-good story, and Medicine Ed isn’t simply a wise country groom sent over from Central Casting. Ed Salters is a nice guy, but they don’t call him Medicine Ed for nothing. Before Mr. Boll Weevil goes to the gate, he is the beneficiary of Medicine Ed’s secret horse goofer dust, which includes, among other things, a bit of a sticky leaf that fell from a limb of a beech tree that grew sideways out of the grave of Eduardo Salters, the greatest jockey ever to come out of South Carolina, born in slavery and killed in a match race in 1888. The dust also contains some high-octane herbal eye-openers and a fleck of dried blood from Platonic, the fastest horse Ed ever rubbed.

And before the gate opens, they remember to bet.

The story is set some 40 years ago, when the author herself worked as a groom on the West Virginia circuit. Her fictional horse heroes — Pelter, Little Spinoza and Lord of Misrule — are no doubt drawn from the bottom-of-the-ladder steeds she met in those yesteryears. And probably, too, such denizens of the backside as Deucey Gifford, a trainer with one horse, and Joe Dale Bigg, a trainer with many, who operates behind the tinted windows of a block-long Cadillac that prowls menacingly along the shed rows.

Looking over all this is Two-Tie, so named because he always wears two bow ties, one black and one striped. Two-Tie was long ago barred from the racetrack, but finds that a vantage point outside the gate offers him a broader perspective of what is going on inside, and helps him see to it that things come out as they are supposed to.