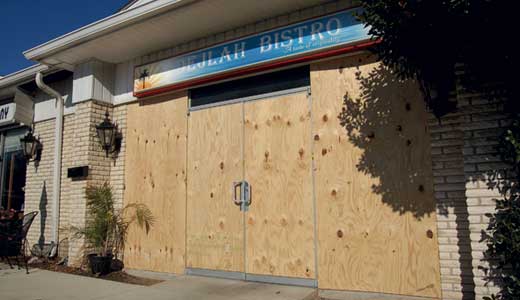 After being shot at by gun-toting assassins in his native Iraq, preparing gourmet meals for then-dictator Saddam Hussein, and risking his life by supporting the U.S.-led military occupation, chef Duraid Abdulrida didn’t expect danger to follow him and his family to Louisville’s typically low-crime St. Matthews neighborhood.

But last week, on the eve of Thanksgiving, that’s exactly what happened: An early morning fire consumed the dining area of Dejlah Bistro — the 4123 Oechsli Ave. restaurant where Duraid serves as head chef — in what investigators say was an act of arson. According to several witnesses, including Duraid, an ethnic slur was scrawled on the wall inside the smoldering restaurant, although investigators have not confirmed whether they believe the crime was racially motivated.

“I’m not doing so good,” Duraid tells LEO Weekly. “When everything (we were working for is) destroyed within minutes, you’re not going to feel so good.”

Although Louisville Metro Fire investigators are releasing few details about the 3 a.m. blaze at this time, they have confirmed that the fire, which virtually destroyed the bistro’s dining area and offices but left much of the kitchen intact, was intentionally set. The neighboring Vacation-Experts travel agency received minimal water damage as a result of firefighting efforts.

Dejlah Bistro now sits empty, its doors and windows boarded up with plywood, the property reeking of soot and smoke. At the restaurant’s rear, a metal door lies propped against the building, warped and concave as if blown outward with great force.

“Our official position, and the only thing I can say, is that this is an active investigation,” says Major Henry Ott, spokesman for the Louisville Metro Fire Department. “Other than saying it was a set fire, we’re not at liberty to provide (more information) right now.”

Specifically, he declined to comment on the alleged racial epithet at the scene.

Given the nature of arson cases, which require extensive examination and analysis of materials at the crime scene, Ott says the investigation could take months, or even up to a year.

By the time Duraid awoke at 7 a.m. on Wednesday, Nov. 24, he had already missed several calls from his boss, Dejlah Bistro owner Hazim Sadkhan, who had just found out his business was engulfed in flames.

“I called Hazim back,” Duraid says, “and he told me about the fire, so I (went) there immediately. Everything was dark on the inside. Ruined.”

Firefighters had put out the flames by the time he arrived, and Alcohol, Tobacco, Firearms and Explosives (ATFE) agents were milling about the scene. As the Iraqi men surveyed the damage to their business, Duraid managed to find a silver lining amid the charred remains of his livelihood.

Because this is a criminal investigation, Sadkhan says ATFE and Louisville Metro fire officials aren’t telling him much of anything. He’s waiting for the deliberation to quickly come to end so he can begin negotiating with the insurance company to cover the damages, which might pale in comparison to the $120,000 he has invested in the business.

Yet even if the insurance company comes through, Sadkhan has some misgivings about starting over.

“Actually, I am afraid to reopen,” he says. “Maybe next time they will get me killed. I am taking this very seriously,
you know?”

Considering the circumstances, Sadkhan’s apprehension is understandable. According to his account and the confirmation of others close to the restaurant, the phrase “nigger get out” (or a variation thereof) was spray-painted on an interior wall of the burned bistro in dark spray-paint, ostensibly as a warning to its Iraqi proprietors.

“These are very rubbish people (who did this),” Duraid says. “It would be a shame for us to run away … People like our food.”

“I am just shocked to see this written,” Sadkhan says. “I don’t know who’d do that. If that (is referring to) me or anybody here, I don’t know.”

Tyler Martin, a friend of the Abdulrida family and University of Louisville graduate student, surveyed the fire damage first-hand and says he saw the slur.

“(Duraid) came over to get away from the threat of death by supporting American soldiers,” Martin says, “and then he comes over here and he gets attacked like this … It’s very disappointing.”

Martin met Duraid through his father, Brian, who volunteers at Kentucky Refugee Ministries (KRM), the Highlands-based nonprofit that acclimates immigrants to life in the United States. After immigrating to America in 2009, Duraid and his family received assistance from KRM.

The afternoon following the fire, Martin says he arrived at the restaurant to help the men get their insurance paperwork in order.

“They just had it taped off,” Martin says of the scene. “There were a couple of (ATFE) agents in there, and people from the fire department, and they were just going through and collecting evidence.”

Despite the racist graffiti, Major Ott says investigators are not officially treating the fire as anything other than arson. “We don’t know if it’s a hate crime,” he says, declining further comment. “It’s still too early in the investigation.”

In the last few months, Duraid says his car tires have been slashed and its windows busted out, but he isn’t going to move again to escape the violence.

“The United States has given a safe place for my family, and we aren’t going anywhere. When we started to open a restaurant, everybody was helping us — including the LEO magazine, of course,” Duraid says, referring to a May 5 profile chronicling his transition from “Good Morning Iraq” chef superstar to United States immigrant and local chef, as well as a Sept. 8 dining review that called Dejlah’s food “serious ethnic fare, fashioned with skill and care.”

“I see a lot of cooperation from people here,” Duraid says. “I didn’t think I had any enemies here, so maybe somebody doesn’t like us. But it’s a very small number of people (who might feel that way). I love all people, I like all people, and I’m sure 99 (percent of) people like us. That’s what I see here.”