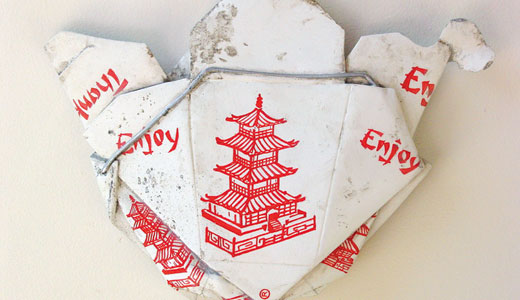 By now you may know I have a passion for trompe l’oeil, as I often proclaim its virtues. That “fool the eye” trick that causes the object depicted to seem to be one thing and then, after several viewings, to reveal its true nature always gets me: a painting on a side of a building with stairs leading nowhere, a figure crawling out of the picture plane onto the frame, a piece of trash that isn’t trash.

The latter is the domain of Tom Pfannerstill, one of the best trompe l’oeil artists around. His latest exhibition at Galerie Hertz is full of new art on old themes: self-portrait busts, three-dimensional still-lifes and found object “trash.” The trash is where he excels.

Before you think, “What’s the big deal? So he makes art from trash,” it’s time to pull back the curtain and reveal the wizard. He’s not making art from trash, he’s creating art that looks like trash. Nothing on the walls of the gallery is the real object. The art is recreated, carved in wood and painted in acrylic.

Pfannerstill began this series in 1990 and calls it “gifts from the street.” It takes a special person to see trash as a gift. For Pfannerstill, it’s the life of the object that is interesting — new items from a store need not apply.

“In these humble objects, I find an interesting record of man-made objects that have been acted on by natural forces,” he says. “They have been altered, bent, folded and scarred — in a word, individualized.”

When asked how long it takes to create one of his trash pieces, Pfannerstill says, “Some are pretty quick, some not. I take as long as it takes. I’m going for the surface. Finishes are something I take a lot of time on to get the surface right.”

Like a good cultural historian, Pfannerstill takes detailed notes, which are revealed on the back of each piece.

His commentary on “Collagen Lip Lift” reads: “Found on Baxter Ave. in front of the monument co. on 4/18/07. I can’t for the life of me understand why anyone would strive for those puffy fish lips. Oh well …”

“Chinese Take Out” explains it was “Found on Hoertz Ave. on Dainty Day, a neighborhood gathering that features hitting a dainty … with a broom handle, part of the Schnitzelburg Festival on 7/26/10.”

Other longtime passion projects for Pfannerstill are his busts and framed still-lifes. The heads contain pieces of self-discovery for the artist.

“Though they are not self-portraits in the strictest definition of the term,” he says, “they depict alter-egos, represent people I might have become or personalities I wanted at one time to be.”