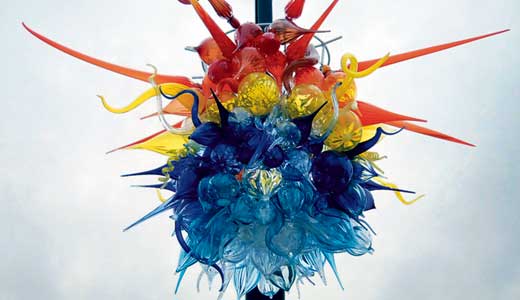 Public art is exactly what it sounds like — art for the public. You get the chance to engage with visual art as you go about your daily business. Art becomes a part of the neighborhood.

In the case of “Creativity Rising,” art came to Phoenix Hill thanks to curator Aron Conaway, the Phoenix Hill Neighborhood Association, the Center for Neighborhoods, and local artists. “All 12 pieces were installed outside, in the elements, on the sides of buildings or in open spaces,” Conaway says.

There is a case to be made that art already resides in the Phoenix Hill area due to the gallery district’s location on East Market Street, aka NuLu. But that’s art for sale. Because of Phoenix Hill’s socioeconomic variance, some residents may feel they are not welcome inside the art galleries.

Conaway hopes the public art project will help bridge that gap. “The overall goal of the project was to increase the neighborhood’s visibility and strengthen connections between the gallery district and other pocket communities within the Phoenix Hill neighborhood,” he says.

Conaway is one of those people with energy to burn, and luckily for us, he focuses it toward art. He knows the city well; he grew up in the Highlands, lives in Germantown with his wife, artist Hallie Jones, and owns property in Portland. He co-founded the defunct LAVA House and currently works for the Louisville Visual Art Association. Art, especially community art, is in the blood of both Conaway and Jones. “We’re very proactive,” he says.

The Phoenix Hill Neighborhood Association came up with the idea for the project. They brought in Jones, who works at the Center for Neighborhoods, with Conaway added later as curator. After receiving the Kentucky Arts Council’s Arts Build Community Grant, Conaway chose the artists, then “discussed with each of them the historical and current social contexts of the neighborhood and each space they were interested in.”

“(The project) is going to be up as a full 12 pieces … ending next June,” Conaway says, “then each piece will be considered for removal or staying depending on condition, artist and property owner concerns.”

Gwen Kelly’s “Serenity Seat Shrine #1” is near the sidewalk of The Green Building, 732 E. Market St. Kelly wants you to stop and sit a spell.

“If more people were willing to simply be still more often, we’d create a more thoughtful, peaceful world,” she says. If quietly sitting is too much for you, Kelly has left a timer, note cards and books to assist you.

Visitors are encouraged to anonymously record their thoughts. The comments do reflect the state of mind, or lack there of, of guests: “You’re awesome!” “Thanks!” “1st time in KY and loving it.” “It changed my perspective to sit and just be, really hearing the birds, wind, etc. Thanks.” “We made out! Thanks! If there wasn’t a bench here, I’d never land my girl.” “Oh crap. I thought this was a toilet. Sorry.”

“I have chosen to focus on the decorative star-shaped brick ties you see throughout the Phoenix Hill neighborhood,” says Simon. “Indicative of the architecture, these iron stars shore up areas of instability in the thick brick walls of the early 20th century structures.”

At the corner of East Market and Campbell streets sits a small shopping center that includes Signarama. Brook White’s “Beacon” faces outward to the intersection, close to his Flame Run Glass Studio and Gallery. His sculpture proclaims that Louisville Metro is indeed a glass art site.

Mary Yates’ “Fresh Grasp” is by the Phoenix Hill Townhouses at the corner of Campbell and Marshall streets. The photographs of fruit encircling a tree refer to how some areas of the city have limited accessibility to fresh produce.

Skylar Smith’s “Portrait of a Neighborhood” takes the idea of public art from the visual to the audio. She recorded interviews with neighborhood residents, then made them accessible by phone. The Phoenix Hill audio cell phone tour includes artists such as Ed Hamilton and Mary Craik, gallery owners Chuck Swanson and Paul Paletti, various property owners, including Trudy Miller and Gill Holland, and historian Tom Owen. Locations are marked on the sidewalks with round orange signs featuring the phone number (502-554-9169) and prompt number. For the list of 15 interviewees, sites and subjects, visit the website.