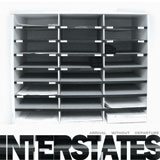 Louisville’s tradition for groundbreaking instrumental music needs to include Interstates, and not as a footnote, either. Basically the solo project of drummer/producer/all around nice dude Alex O’Nan, Interstates expanded its line-up to include three other people for this three-song, digital-only release. O’Nan’s instincts for cinematic post-rock led him down similar avenues as contemporaries Maserati and precursors like Surrender to the Night-era Trans Am. Which is not to say Interstates is wholly derivative — more like a distant relative who comes in for the holidays, and whom you’re always glad to see. O’Nan’s compositional literacy doesn’t end with gunshot-snare hits; organ and snake-charmer guitar riffs around “Departure” are but two of many examples of good decision-making.