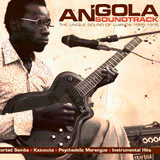 Subtitled “The Unique Sound of Luanda, 1968-1976,” this consists of great electric guitarists and carnival bands from Angola’s oft-mentioned golden age of music. These groups wrote and played in relative anonymity to Western audiences until the French label Buda Musique released collections in the late 1990s. Taut, danceable tunes overflow with fantastic rhythmic prowess that ranges from hypnotic to celebratory. We almost missed out on this entirely. Before he could begin hunting down the artists in the compilation, producer Samy Ben Redjeb had to jump through bureaucratic hoops for two years to even be allowed to travel to Luanda and bring these recordings to more listeners. We all benefit.