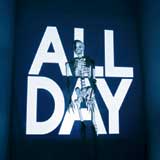 Based on his production style, it seems Greg Gillis thinks songs are sacred cows to be tranquilized and thrown on a conveyor belt leading to his hard drive. Because of the liberal use of sampling, the Pittsburgh biomedical engineer is lucky the law hasn’t caught up with him, although Illegal Art’s website says he’ll disclose the artists sampled on All Day once the FLAC version is released. Girl Talk divides its listeners into a couple of camps: fans who look to him as grand conductor, a mash-up maestro who unifies genres in reverential yet unencumbered ways; and a less benevolent faction (artists, attorneys, RIAA types) that sees a thief who never met a rationalization he didn’t like. Discretion in sampling hasn’t been the same since Paul’s Boutique, but Gillis’ view of sonic art as a disposable medium is becoming an unsustainable theme. Every party has a curfew.