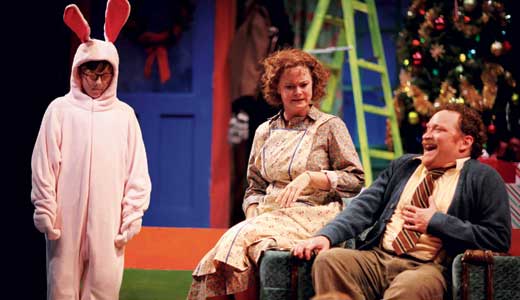 I walked into the Pamela Brown not really knowing what to expect. I’ve seen the film “A Christmas Story” like everyone else, and, to be quite honest, I was a little apprehensive. How do you take a story that most of your audience is not only familiar with, but has probably memorized? How do you dare recreate what most people hold as a holiday classic? Well, if you’re like Actors Theatre, you knock their socks off.

I probably don’t need to tell you, but “A Christmas Story” is the hilarious and endearing story of Ralphie (Henry Miller) and his desperate quest to get a Red Ryder BB Gun for Christmas. Adapted from the film of the same title and based on Jean Shepard’s short stories, the play involves Ralphie and his family and friends, a leg lamp, a tongue stuck to a flagpole, a bunny suit and many other odd situations.

The entire cast works well together, and under Sean Daniels’ direction, they seem to find the balance between being authentic characters and hilarious moments of broad comedy. Liam Craig, as the narrator, the older Ralph Parker, has the unsung role of being the straight man to an entire cast, and he does it extremely well. Of course, it must be said that all the kids in the show, especially Miller, Gabe Weible as Randy and Will DeVary as Flick, hold their own quite well.

One of the highlights of the production — and something not in the film — is the elves. With the uproarious holiday music and the dancing as they change the set between scenes, their excitement is catching. When was the last time you saw over-the-top dancing without the slightest hint of irony? Exactly.

As one “A Christmas Story” devotee to another, this production doesn’t take away from the nostalgic moments you know and love from the film. It’s its own holiday classic and one that should be shared.