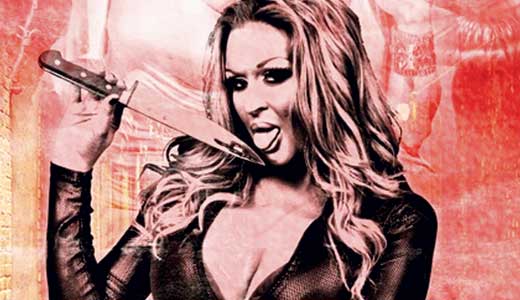 There has long been disagreement between gore-geeks regarding which is better: “high horror” or “low horror” (think “Suspiria” and “Friday the 13th” respectively). But all agree that this movie is beyond classification, a gruesome and wildly extravagant experiment from Lars von Trier (“Europa”) that perfectly captures the poetic elements of Dario Argento, combined with real-life horror elements — in this case, the loss of a son. Stars Willem Dafoe and Charlotte Gainsbourg as the grieving parents. Very possibly the last horror film you will ever see.

Yep, the title says it all! Boner, a gay-bashing, baseball-bat wielding bigot/rapist, tricks a trio of transgender show queens into a violent hookup that leaves them bloody, bruised and battered beyond consolation. So what’s a worked-over weenie-woman to do? Why, gather together their tranny friends and treat one and all to some sparkly red ginsu justice, of course! A joyous rape-revenge revival with a killer twist.

DOCTOR WHO: THE COMPLETE FIFTH SERIES

We generally prefer the old Tom Baker “Doctors” to this new series, but we have to say that Matt Smith has certainly captured Tom’s unpredictable quirkiness. But the real star this season is his lovely companion, Karen Gillan; a skinny redhead with cute legs who seems to be even daffier and more over-the-top than Matt. (For those keeping score, Matt is the 11th Doctor Who and, according to the Laws of the Time Lords, he can only have 12 regenerations, something that the BBC seems to have conveniently forgotten.)

A boxed set of motivational DVDs in which some of the biggest names in sports yell at you. Series guest stars include Mike Ditka, Rex Ryan, Bobby Bowden, Mike Singletary and Sean Payton. Individual episodes available for $19.95 each.

Adam Sandler, Chris Rock, Kevin James, David Spade and Rob Schneider are overgrown children. They are also in this movie, which brings the once-childhood buds back together for some athletic male bonding and lots of “Oh! My hip!”-type jokes. If you like Sandler and Schneider, you’ll like this. With Salma Hayek, Maria Bello and Maya Rudolph as their “only in the movies” beautiful wives.

Joe Pesci and Helen Mirren go slumming in this sort of true tale of the founders of Nevada’s first legal whorehouse, the Mustang Ranch. Gina Gershon — born to play a trollop — convinces Helen to have a hump on Joe’s pet Argentine boxer, Sergio Peris-Mencheta, while hubby Joe is busy test driving the rest of the staff, including Scout Taylor-Compton, Bai Ling and Taryn Manning.

A nice, if kinda artsy romantic fantasy with the incomparable Martin Landau finding love for the first time in his life. Co-stars Ellen Burstyn, Adam Scott and the always-welcome Elizabeth Banks.

An outstanding offering from the late, lamented Satellite of Love! For the first time ever, the complete “Robot Monster” episode from Season 1 with Joel Hodgson! Plus Ed Wood Jr.’s immortal “Bride of the Monster” with Bela Lugosi, the 1964 ventriloquist horror “Devil Doll” and the great-granddaddy of Corman’s “Sharktopus,” “Devil Fish.” Lots of bonus crap, too. A limited-edition release, so get yours NOW!

Fans of author Beverly Cleary have been eagerly awaiting this release for months. And why not? The casting is absolutely perfect with cute little Joey King as Ramona and Selena Gomez as her long-suffering big sis. Bridget Moynahan is terrific as Mom, and John Corbett seems to be having the time of his life as Dad. A great multi-generational comedy for the whole family. Enjoy.

SCOTT PILGRIM VS. THE WORLD

Michael Cera may be just about to outgrow his teen/young-adult looks, but he valiantly goes once more into the breach in this truly awesome, seemingly timeless look at what it takes to find the right girl. He once again plays a slacker, this time fixated on cute-as-a-bug Mary Elizabeth Winstead (“Live Free or Die Hard”) — but he has to literally fight her seven deadly ex-boyfriends for the right to date her! Undeniably charming; the perfect date movie.

While today we take the names Superman, Batman and Wonder Woman as symbols for truth, justice and the American way, there was a day when comic books were considered subversive and downright degenerate. This fun doc looks at the 75-year history of DC Comics, all their best creations and the people behind the powers.

SHINSENGUMI CHRONICLES: I WANT TO DIE A SAMURAI

Another great, once-lost Raizo Ichikawa sword-and-sushi drama from the folks at Animeigo. Here he trains to be a Samurai, to serve under Lord Kondo (Tomisaburo Wakayama). But he finds that the reality of life by the sword is far from the code of justice he is sworn to uphold.

A wonderfully warped and truly twisted ode to cheezy women-in-prison movies. Daisy (Starina Johnson), an innocent woman, is sent to a sadistic prison lorded over by Betti O and populated by the likes of Princess (Jane Wiedlin), MeMe (Susan Traylor) and Esther (the immortal Mink Stole).