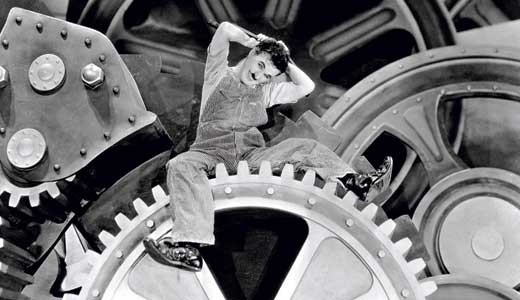 Possibly the most famous silent movie of all time: Fritz Lang’s masterwork, once all but lost but now available as “The Complete Metropolis.” In a towering city of the future, an idle ruling class is unaware that, underground, dehumanized workers toil and die to support their carefree civilization. A landmark in sci-fi cinema, now available on Blu-Ray with a pristine score and all the trimmings. Simply breathtaking.

Charlie Chaplin’s final silent film (released with music and sound effects but no dialogue) may be his best. Here he toils tragi-comically amid the machinery of the world, bored out of his mind and aching with love for beautiful Paulette Goddard. This was also the last time he played the Little Tramp, giving it his all as he quite literally battles the gears of society, arriving at the end … sore. One of the world’s great movies, a must-own.

OK, OK, everyone seems to have ganged up on James Cameron for making so much money on this movie, but … come on! It’s a lot fun! Now available in its original theatrical form or several Extended Collector’s editions, including Blu-Ray, and with hours of bonus goodies absent from the original DVD release. Worth every penny.

Somewhat delayed follow-up to 2001’s “Cats & Dogs,” once again prowling the unseen conflict between the twin species, ever battling over the world of humans. And the time was well spent: This is that rare case where the sequel is better! Great voice talent takes a back seat to a clever plot and great writing as the two groups must join forces — with a pigeon! — to reign in a rogue pussy who threatens their stalemate. Lots of fun.

An earnest indie sci-fi tale with a message. Mankind creates a genetically enhanced slave race, but they revolt, leading to a 300-year war leaving man cowering in the rubble of a ruined Earth. And in this world, a powerful politician urges his race to destroy the remaining human scourge once and for all. We liked it.

This is another seasonal motion-capture outing from Robert “Polar Express” Zemeckis. We are not fans. In this one, Jim Carrey’s voice is used to humanize the distorted Ebenezer Scrooge tale, morphed into an action-packed slapstick thrill ride, designed to sell Disney World vacations where you can no doubt now ride a “Christmas Carol” rollercoaster. Zemeckis has just gotten lazy.

A husband, pillar of the Jerusalem ultra-orthodox community, falls in lust with a hunky male student. Oy! While this would have made a great musical, it’s done as a serious drama, up to its oyern in shuldik and umet. What a world.

Bow Wow stars in this far-better-than-it-has-to-be Afrocentric comedy about a young man who wins a $370 million lottery but cannot claim his prize until after a long holiday weekend. During the delay, every sort of whack-job, nut-ball, relative, gangster, female and would-be friend shows up on his doorstep. The humor and situations are natural, even when they go over-the-top. Gangs of fun with Brandon T. Jackson, Loretta Devine, Charlie Murphy and Ice Cube.

PICTURES OF STATUS QUO: PROFILE OF THE PSYCHEDELIC ROCK BAND

Status Quo, Britain’s hardest-working, longest-lasting rock band — having played together for 40 friggin’ years — finally gets a decent biography. This doc looks at their humble beginnings in the early ’60s, right through the present as they prepare for their “Pictures” tour. If you’re not familiar with the music of Francis Rossi and Alan Lancaster (“Matchstick Men” was their first U.S. hit), you owe it to yourself to check this out.

Fans of “Tokyo Gore Police” will love this live-action tale of a beautiful, graceful geisha and her crude sister who are transformed into killer cybernauts by an evil corporation — complete with machine-gun boobs, razor-sharp butt blades and more! Ultraviolent and damn entertaining.

Paul Dano and Kevin Kline are having the times of their lives in this super-smart lowbrow comedy about a man (Kline) who makes his living as the arm-candy of billionaire widows, with Dano as the young man whom he grooms in the art. Katie Holmes is great, as always; John C. Reilly does some of his best work ever. Recommended.

THE KIDS ARE ALL RIGHT

No, not the priceless documentary on The Who, this is a smart, complex and thoroughly entertaining tale of family starring Mia “Alice in Wonderland” Wasikowska, Josh “Bridge to Terabithia” Hutcherson, Annette Bening and Julianne Moore. The latter two steal the show as Mia’s lesbian parents who help guide her as she seeks out her biological father. One of the best movies we’ve seen in years.

This live-action take on the wildly popular cartoon show, “Avatar: The Last Airbender,” suffered at the box office from the backlash against director M. Night Shyamalan. But the movie is certainly a faithful adaptation of the show, with Dev Patel starring as the lone Avatar who can manipulate all four of the natural elements and save the world from the tyranny of the Fire Nation. A visual feast for the TMNT set.

THE NIGHT OF THE HUNTER

A Blu-Ray/Criterion release of one of the world’s great movies. Robert Mitchum stars as a Bible-quoting sociopath who marries an addled woman (Shelley Winters) in search of her late bank-robber husband’s buried loot. But it’s the way he looks at her two children that’ll make your blood run cold. Directed in phantasmagoric glory by Charles Laughton and written by James “The African Queen” Agee, this ranks as one of the most sinister and blood-chilling movies ever made. A true masterpiece.