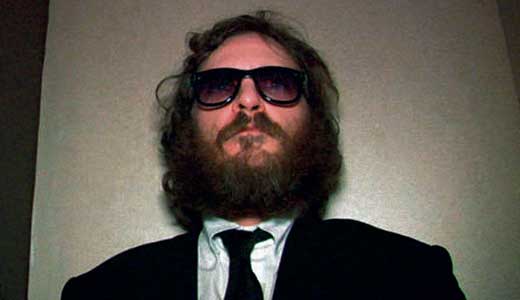 Yawn. Wretch. Urp. Who the hell decided that this boring puddle of estrogen was somehow a movie? Snooze. Snore. Zzzzz. Julia Roberts divorces her husband to pay for a ’round-the-world journey to “find herself.” Men. Bad. Boo. We could have saved her the trip: Hey, Julia! That’s you! Right there! Boring the snot out of people. Dumb. Dum. Duh.

The single worst publicity stunt in history, or the true personal meltdown of a total douche? Joaquin Phoenix stars as himself in this supposed documentary on how he ended his film career in favor of becoming a fat, slovenly rapper. Frankly, we’ve always thought the guy was a hack, so any non-movie direction is OK with us. From the mind of Casey Affleck, who brought you such blockbusters as “The Last Kiss,” “Lonesome Jim” and “American Pie 2.”

CHILDREN OF THE CORN

Normally we’re not big on remakes, but this Stephen King title needed it. Much closer to the written tale and far, far more disturbing than the original, David Anders and Kandyse McClure are unhappily married and stranded in a cornfield in the middle of nowhere with a band of murderous children who intend to sacrifice them to He Who Walks Behind the Rows. Nice.

This David Lynch-like mystery/thriller stars two of the world’s most beautiful women — Sophie Marceau and Monica Bellucci — in a psychological tale of a woman losing her sanity. Maybe. Is she really changing, or is someone else stealing her memories and identity? A daring bit of indie filmmaking, to be sure.

Rob Reiner directed this minor joy for kids that looks at the simple bliss of a young boy and a young girl becoming friends in the early ’60s. The boy thinks the girl is weird. The girl falls in love with his blue eyes. And life goes on. A little gimmicky as the dialogue flops back and forth between the two characters, but this is moviemaking at its very best.

Christopher Eccleston — who we thought made a damn fine Doctor Who — stars as John Lennon in this BBC biodrama. The man had problems, there’s no doubt about it. Abandoned by his father, at war with the other members of the band and belittled by comparisons to McCartney in the press, he abandoned his own wife and son for Yoko. And the legacy all this destructiveness? Some of the most profoundly human music ever recorded.

Tyler Perry has finally stopped putting his name in front of everything he does, letting the material stand on its own. Here, Mom Shirley wants to break big financial news to the family, but it takes Madea (Perry) to wrangle everyone together and make sense of it all.

MOCK UP ON MU

Craig Baldwin, famous for his strange pseudo-docs on alternate Americas that never existed, steps into the future with this tale from 2019, looking back on the last 100 years. You will remember that it was during this time that L. Ron Hubbard decided to build his resort on the moon, but first he needed Jack Parsons (Kalman Spelletich) and Lockheed Martin (Stoney Burke) to build him a launch pad in Las Vegas. The only man for the job was Agent C. (Michelle Silva).

A good, solid indie drama about attractive, intelligent adults, their relationships forged in college during 9/11, who come together years later at a wedding in Georgia, where their passions are rekindled. Stars no big names, though seeing Sunny Mabrey on the screen again was a nice surprise.

A big-ole dumbass noisy guy-flick starring the stars of every big-ole dumbass noisy guy-flick ever made: Sylvester Stallone, Jason Statham, Jet Li, Dolph Lundgren, human junkyard Mickey Rourke, Terry Crews and Randy Couture. Hey! That’s all beef! Where’s the cheeze? Well, we just add a little Steve Austin, some Eric Roberts and slather on “Buffy’s” Charisma Carpenter, then stick it in a George Foreman grill and heat till toasty. Mmmm, good! If there’s a plot, we missed it. Recommended.

THE NATURE OF EXISTENCE

From the people who brought us “Trekkies,” this doc asks the immortal question, “Why do we exist?” Answer? To buy more Video TapeWorm T-shirts! According to the doc-makers, you can trace the answer to where you live, because the key is almost universally based on local culture. Neat.

THE PILLARS OF THE EARTH

A far better cable mini-series than the recent “Spartacus.” Here, Rufus Sewell plays a mason on a quest to build the world’s greatest cathedral, one “bathed in light.” All the requisite deep pockets are on board — a bishop (Ian McShane) and the kids of King Henry (Alison Pill and Tony Curran) — provided that all this light doesn’t reveal secrets the church and the monarchy will kill to protect. Makes your family look good!

One of the most popular shows ever put on TV, largely because no one told that network it was supposed to be sci-fi … Really! Lee Majors stars as the astronaut/test-pilot who plants his pants in the desert, requiring lots of expensive spare parts to fix. And now? Why, now they OWN his ass! Forty discs; 100 one-hour episodes, all uncut and digitally remastered, 17 hours of all-new bonus goodies and much more.